Chloris of The Blooming Garden invites us to share our top ten blooms each month although I have to say that I don’t usually count because that might mean excluding something equally praiseworthy. There are certainly no end of delights this month, and that’s without including the gracefully fading hellebores, a smattering of pulmonaria, a single erythronium and goodness knows what else.

Top of the Pops, however, must surely be the tulips despite not yet being at their peak. Clockwise from top left is a very pleasing purple mixture from Aldi, ‘Little Beauty’, various bargain tulips bought in late December and another elegant species tulip, probably T linifolia. There will undoubtedly be tulips in a vase on Monday!

In front of the purple mix is Viola ‘Cool Wave White’, grown from seed as has Cool Wave Purple and Frost (below). I have grown these each year for the last 4 years or so and they are so reliable with 100% germination in almost every case and months of flowering. I was thinking I was late sowing the seeds  because they are later flowering, thus perilously close to being evicted when their troughs and pots will be required for something else, but I have checked the last few years and each time they have been sown at the end of August or early September. They will be replanted in borders around the garden once they have been homeless where they should flower for most of the summer although they get a bit scruffy after a few months.

The Anemone blanda have been wonderful, both the white form shown below and the blue which I am trying to establish in the blue & white border. If they have been wonderful, the wood anemones in the woodland must be stunning, forming a carpet all down the one side, camouflaging the primroses but allowing the fritillaries to stand proud and tall above the carpet. I am pleased to see a few white fritillaries amongst them, although in reality they are nowhere near as pretty as their pink checkerboard brothers and sisters. Down the left hand side of the woodland there is even a hint of blue from the first bluebells, but not yet evident in this photo. 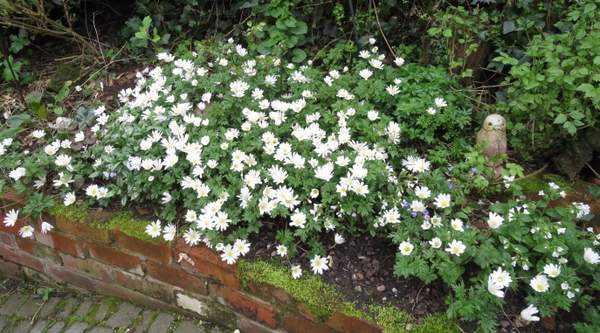 A couple of weeks ago there were no buds to be seen on the clematis colonnade, but now all the alpinas are breaking into colour, some growing more strongly than others. Below are C alpina ‘Pamela Jackman’ and ‘Constance’. I keep trying to improve the performance on the colonnade but the soil is drier than it could be and even the hardy geraniums at their feet don’t really thrive. Perhaps it would be worth replacing some of the soil here, or removing everything in turn and digging deeply, incorporating more compost before replacing them….something to think about.

In the greenhouse the Winter Sunshine sweet peas have been growing apace and  getting closer to flowering each day – but today was The Day, with the first flower (singular) on each of Mauve, Navy and Opal…and a hint of sweet pea scent…mmm

Finally, something I so often miss because the blooms are so ephemeral and I tend to ramble around the garden looking DOWN at the borders rather than UP – so it was catching a glimpse from just outside the house of a frothy white mass peeking out above a neighbours’s pigeon loft that sent me hurrying down the garden to admire the Amelanchier lamarkii which may be well take the Number One spot at this precise moment because it is absolutely STUNNING! Later in the afternoon a gentle breeze removed a number of petals, giving the impression of a warm snowstorm as one walked underneath and justifying one of its alternative names, the ‘Snowy Mespilus‘. Amidst the petals the new leaves are also emerging, a delicate copper colour when they first appear. What a delightful small tree this is!

Chloris will be posting her own top ten April plants in due course, so do pop over and have a look and perhaps choose your own favourites too. Thanks for hosting, Chloris.

28 Responses to Best Blooms in April