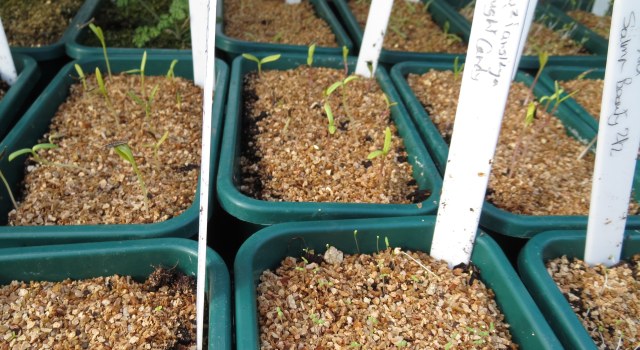 And so the song continues with various other mishaps experienced by the unfortunate Michael Finnegan; here, however, it is not mishaps befalling me over and over again, but the exciting cyclical tasks demanded of an active gardener! In particular, last week saw the start of early seed sowing, following on from autumn sowing of sweet peas and some hardy annuals. The modified pan stand ‘contraption’ was duly brought down from the loft and set up next to the Aga and although seed sowing didn’t quite manage to take off on the first day of February, it was certainly achieved the next day and within a week all early sowings had germinated and were transferred to the greenhouse. Isn’t it exciting?! I don’t think I shall ever cease to be thrilled at seeing new seedlings emerge within a few days from their tiny beginnings and following their progress over the following weeks and months into glorious plants of sometimes huge proportions…

You can see what has been sown so far by looking under the Sowing Records tab above, which will just list what has been sown and in what month. My own records have details of germination times and dates of pricking out, potting on, planting out and flowering and these have improved invaluable from year to year, building a solid knowledge of the whole process. You will see from the list that I have been encouraged by Christina and Chloris’s 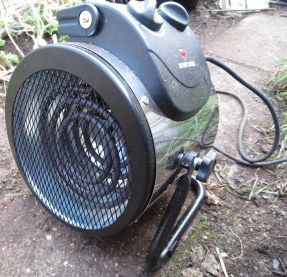 success with ‘everlasting’ blooms and have included them for the first time. In the greenhouse, seedlings and overwintered plants are kept at a little above freezing by this thermostatically controlled heater (Bio Green Palma Heater), which is set at around 4°C; a new addition this winter, this heater replaces the tubular heaters which were plugged in on nights when frost was expected, and with a fan I know the heat is distributed throughout the greenhouse, which can be checked with max/min thermometers at both ends.

Enjoying the increased daylight hours and their free run of the greenhouse border, the Winter Sunshine sweet peas are settling in well and contemplating the long climb up the jute netting that they have been treated to this year: 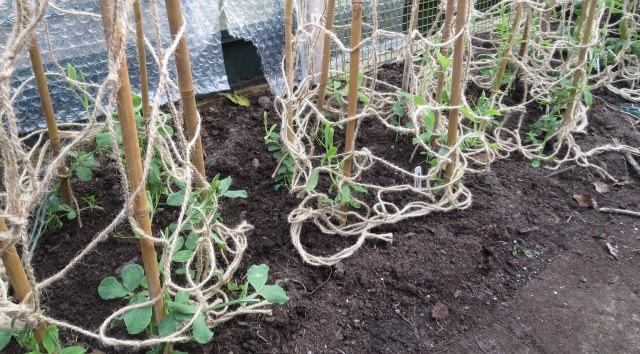 Exciting times ahead, and not a mishap in site!

17 Responses to Beginagain (like Michael Finnegan, but without involving whiskers)