Choosing my top January blooms this year is even easier than previously because, despite their early start, my special snowdrops have slowed down and are at not yet at their peak. A few, like Mrs Macnamara and James Backhouse, have already peaked but still look good, a couple are definitely over, some have barely pushed their noses above the soil but the majority are still poised to open their first buds. Meanwhile, the natives in the woodland edge border are possibly a little earlier than usual and about to come into flower too. So, no, I am enjoying my regular inspections of the snowdrops, but they are not top bloomers this month; neither are the hellebores which are at a similar stage, flowering stems just about pushing through and beginning to open just above ground level. They will be lovely in due course, but not yet:

Chloris who kindly invites us to share our top monthly bloomers has dubbed me the ‘Queen of Witch Hazels’; apart from having twelve of them in my garden I have no idea where she got the inspiration for this title…. Whether it is deserved or not I suspect she is quietly plotting to steal this crown (if it exists) as she likes witch hazels just as much as I do! They are certainly up there with snowdrops and hellebores for bringing colour and interest to the winter garden but this year they undoubtedly reign supreme in my garden this month. Of the twelve, two are not flowering: ‘Pallida’, my smallest and nearly newest (3 years), developed no flower buds during the summer so will not flower  this year, and ‘Spanish Spider’ has buds but shows no wispy signs of opening yet.

Let’s start with the oldest of the others: ‘Zuccariniana’ was bought in 2003 from a garden in Albrighton which held a National Collection of Hamamelis. This garden closed in recent years and the land was sold but I don’t know what happened to the collection. My specimen is a typical urn shape and on measuring it today I can tell you it is 180cm tall by 240cm wide, much wider than it is tall. Bought at the same time is ‘Harry’, my favourite with his extra long shreds and in an enviable position directly outside one of the kitchen windows. He does not flower profusely, but I don’t mind that because he is so handsome. I bought three when I visited this garden, and I think the third must have been Jelena who is an absolute STAR this year. Just stunning!

‘Diane’ must have been bought at a similar time but was planted in the woodland where she languished until rescued in the nick of time and replanted in the streamside grass, just facing ‘Jelena’. I learned from this that, contrary to what we may have thought, they do prefer a more open position where they won’t dry out. She is still catching up but flowers well, albeit coming into bloom with her scarlet shreds a little later than some. You may not know that ‘Jelena’ refers to Mrs Jelena De Belder, well-known in horticultural circles for the private garden and public arboretum in Kalmthout in Belgium where she and her husband developed what is now the International Cultivar Registration Authority for witch hazels. ‘Diane’ is her daughter and ‘Harry’ was named for (friend?) Harry van Trier who contacted me after I wrote about ‘Harry’ one year. No doubt there are other family connections. 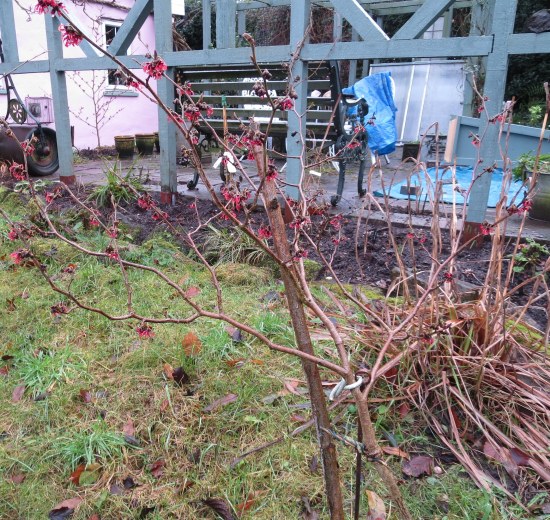 Having time to devote the garden once I finished work in 2011, the others came thick and fast: ‘Ruby Glow’ (possibly) and ‘Orange Peel’ from Crocus, ‘Magic Fire’ and ‘Arnold Promise’ (along with ‘Pallida’) as half price offers from a local garden centre, and in 2014 ‘Amethyst’ and non-flowering ‘Spanish Spider’ from Bluebell Arboretum. I followed ‘Amethyst’ for a number of months as part of a tree-following meme, so can tell you that in May 2015 it was a mere 85cm tall – today it is 165cm! 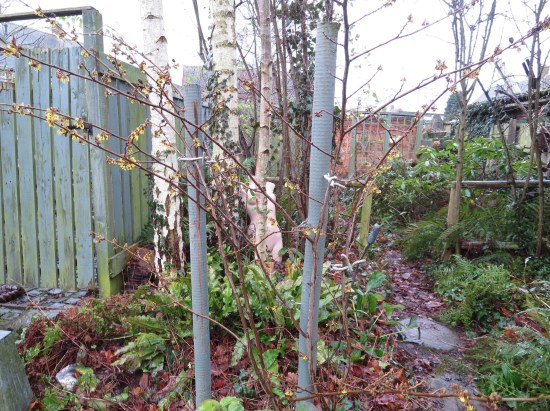 They are slow growing shrubs, but it seems to me that it is worth getting more than just a ‘stick’ to begin with, to ensure you have a decent plant to establish. All these more recent ones were well-shaped plants, perhaps 45-60cm tall in maybe 5 litre pots, and would have cost around £35 some of which I had at half price (other customers used their half price voucher to buy plants that cost just a few pounds; I bought witch hazels). My newest purchase, arriving just before Christmas, was a very much more mature plant and in a different league, costing a three figure sum that not even the Golfer knows; it is no more mature though than H ‘Zuccariniana’ but instead of me nurturing it for all those years, Junker’s Nursery has. Chloris wowed me with a description of ‘Strawberries and Cream’ a couple of years ago and as it is rarely available this seemed the only way to get what I decided (for now) would be the last witch hazel in this garden. It is only just coming into flower now and I hope it lives up to my expectations… 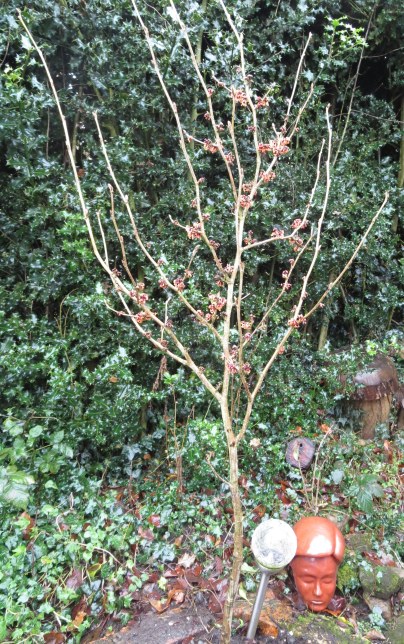 So, there we have my top blooms for January: witch hazels. Do visit Chloris’ blog The Blooming Garden where she will in due course be sharing her favourite blooms for this month. Thanks Chloris! 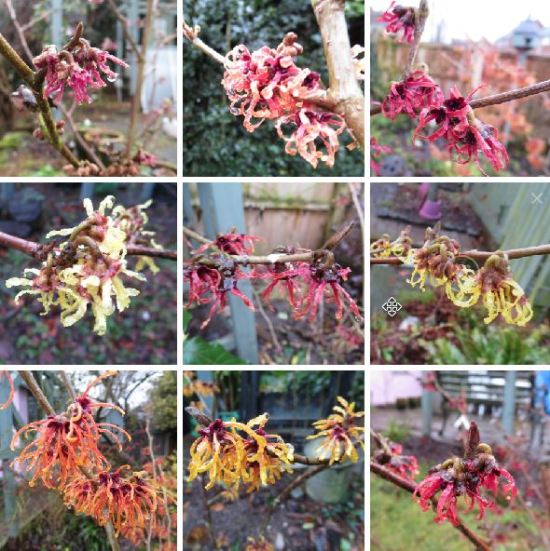