In a Vase on Monday: a Close Shave for a 4th Anniversary 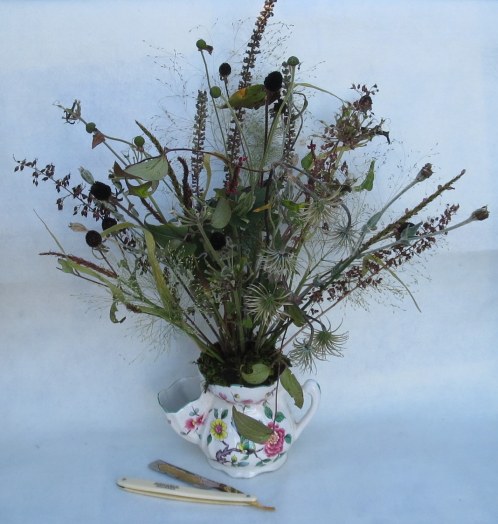 Four years and 208 vases ago, IAVOM began and has since grown to the popular meme is today. I started the weekly vase as an incentive to myself so its popularity has exceeded any expectations I might have had. These days 3-400 posts are viewed on my blog every Monday, 100 or more viewers reading IAVOM with 30+ leaving comments and 20-30 posting vases. In addition, Joanna of Edinburgh Garden Diaries tells me that there is now a #In a vase on Monday on Instagram with well over 200 vases having been posted so far, originating from bloggers who also post their vases on Instagram but now extending beyond that; Joanna very kindly ensures the connection with Rambling in the Garden is emphasised when she posts (or whatever the Instagram technological term is!).

All these numbers are immaterial though because the concept is fulfilling its brief: for people to gain pleasure from picking material from their own gardens and bringing it inside. Alongside this success comes the support and knowledge and plant material that has been shared generously by contributors. For many of us, Mondays revolve in a strange sort of way around these vases and several admit to IAVOM changing their life in subtle ways too. As you know, as ‘facilitator’ of the meme I ensure I post every week, even when not at home, and follow up all comments and vases except on a few occasions when I am away, but that’s not expected of everyone. It’s an ‘as and when’ meme, but of course I am delighted that many of you also want to (or feel the need to) post every week – because I know what pleasure there is to be found from observing vases of our own blooms over the ensuing days. Here are a selection of mine from this last year, one from each month: 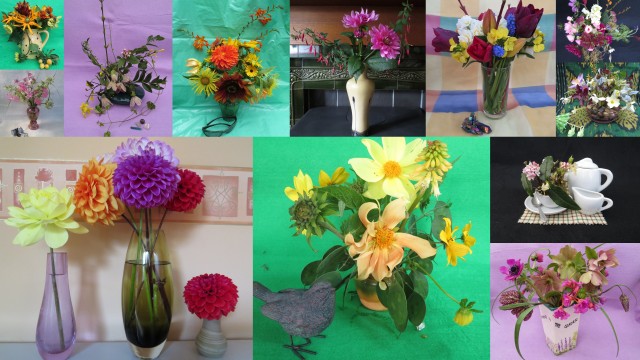 So, welcome to the 4th anniversary of IAVOM, on a day when I challenged bloggers to pop their material into something other than a vase. Having a houseful of bits and bobs I myself was spoilt for choice but, with availability of blooms increasingly a touch-and-go scenario, I decided on the title ‘A Close Shave’ so I could raid the Golfers’ shaving memorabilia (don’t ask!) and use a shaving mug as the receptacle. Looking at the rudbeckia barely hanging on in the garden it struck me that as the petals gradually dropped from the raised boss of the flowers, they were almost being ‘shaved off’ by the colder temperatures – and thus the decision to use just shaved remnants of blooms was made.

The rim of the mug encircles a concave enclosure where the shaving soap would have gone, with only a drainage hole or two, so semi-dry material that needed no water was ideal and stems were just inserted into a metal pin ‘frog’ which was covered with moss plucked from the garden. Joining the rudbeckia were remnants of heuchera, persicaria, teucrium, clematis (both viticella and an upright heraclifolia) and  lychnis, with a few sprigs of last week’s Panicum ‘Frosted Explosion’, extracted before its companions went to be composted, added for good measure and to fill out the vase. The result is essentially monochrome (and in some ways similar to last week, but just the ‘works’ and not the ‘fire’), but I quite like it for the different structures it has brought together and especially the clematis seedheads – and also because it serves to remind us that we can have interesting vases at all times of the year, with or without blooms. Supporting the mug and shaved contents is, naturally, a vintage cut throat razor that might have, but hasn’t, shaved the petals from the blooms.

I wonder what other receptacles people have found for the Monday non-vases? All those who join in today, whether their chosen material is in a vase or something else, will go into a special anniversary draw to win a copy of Sarah Raven’s book, ‘The Cutting Garden’, in recognition of the enthusiastic support I have received from so many of you. Just leave the usual links to and from this post, and I shall announce the lucky winner next Monday. 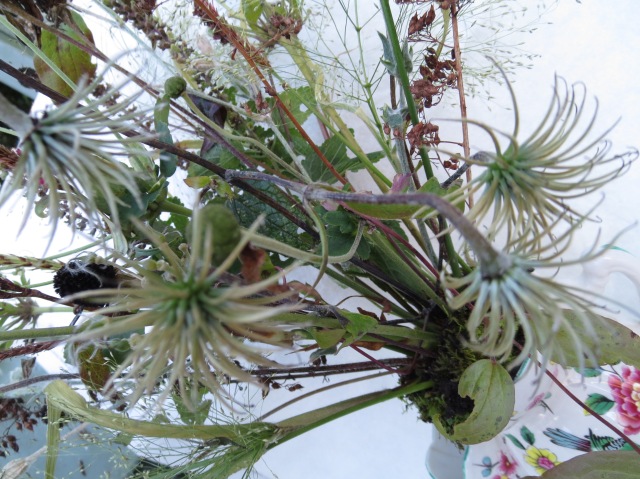 Like Loading...
This entry was posted in garden blogs, Gardening, Gardens, In a Vase on Monday and tagged blogging anniversary, blogging friends, flowers in a vase. Bookmark the permalink.

95 Responses to In a Vase on Monday: a Close Shave for a 4th Anniversary