In a Vase on Monday: Art Nouveau

Today’s vase is  tribute to the dahlia it contains: ‘Art Nouveau’. With an estimated height of only 35cms this was the only dahlia to be planted out in one of the borders where sadly it hasn’t done very well and has suffered more slug damage than any of those in the cutting beds and adjacent pots. It certainly deserves better than that, and it would be a delight to have had more than just the handful of frilly pink blooms that have been produced this season – although the frilly pink blooms have at least been even more delightful than the ‘lilac, underside of petal red-purple’ that the Peter Nyssen catalogue described them as being.

The single stem of dahlias is joined by a similarly single stem of hardy Fuchsia magellanica, fuchsias being a common motif in the Art Nouveau period and featured, or so I thought, on the Royal Brierley Crystal vase that I was considering using because of its style. The vase was a gift from colleagues when I ceased the market research work I did whilst my children were small and I had always considered the motifs to be fuchsias, but today I was less sure and chose a different vase instead. In retrospect, on checking it out, they are indeed the stylised fuchsias of that period. 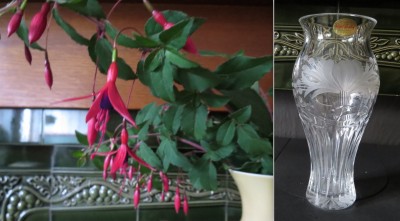 My alternative choice was one of the Caithness Glass ‘Ebony’ vases that live on the mantlepiece in our living room; these were all bought in the 90s from the factory shop in Oban on visits to my Mum. Photographs were taken on the stove below the mantlepiece (top) and with the complete collection of vases (bottom). The vases look like pottery but are indeed glass and I am very fond of them – despite having bought them for their aesthetic quality I really should remember to use them more often on a Monday!

It’s always interesting to see both  blooms and vases in your posts every week so pop out into your gardens or forage around locally and find something to display in your home or workplace to bring you pleasure during the week – then link to and from this post so we can all have a look as well.

Like Loading...
This entry was posted in Gardening, Gardens, In a Vase on Monday and tagged Caithness Glass, Dahlia 'Art Nouveau', Royal Brierley crystal. Bookmark the permalink.

76 Responses to In a Vase on Monday: Art Nouveau