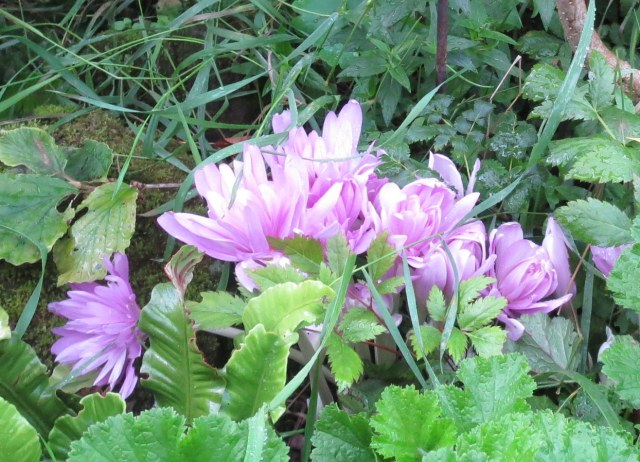 I have been participating in Garden Bloggers Blooms Day for about 5 years but of late have just done a blooms round-up for my own records rather than join in with the GBBD meme itself. Chloris of The Blooming Garden, however, has been celebrating her top ten plants each month and I shall nominally link to this in future.

The ‘Water Lily’ colchicum shown above only just scraped into my list of plants, appearing suddenly between one ramble and the next. Despite a showery day, they still look pristine – but sadly not for long, I expect. I planted some single white colchicum last year and am hoping for a similar but whiter surprise too.

Persicaria have been making an impact in the garden for weeks – ‘Blackfield‘, below, is shorter than most of the other varieties I grow, and forms an integral part of this colour  splash in one of the bold borders, alongside Rudbeckia ‘Prairie Glow’ and R. ‘Goldsturm’, Crocosmia ‘Constance’, Verbena ‘Lollipop’ and Nasturtium ‘Mahogany’:

In the same border, herbaceous Clematis heraclifolia ‘New Love’, Clematis ‘Kingfisher’ and wayward Japanese anemones in the background. Latish flowering C heraclifolia grow to about 3-4 feet on stiff stems and are supposedly good in a vase – but I moved mine from the centre of the bed to the back corner last year so it has taken a step back this year and you haven’t seen it in a vase this year.

All the dahlias have been wonderful this year, most flowering since June but beginning to tail off a little after recent heavy showers. ‘Duet’ and ‘Glow’ are just two of them: 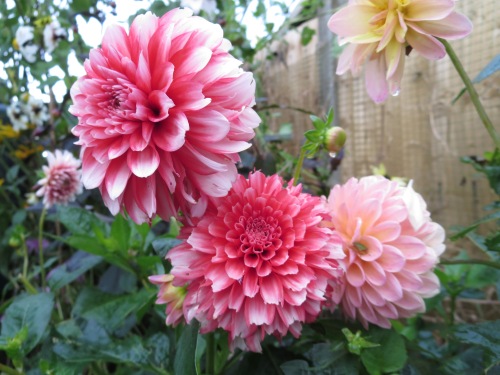 The only rose still making any impact is ‘The Poet’s Wife’ in the shrub border, full of bloom again after a short lull in late July. I am overhauling some of my roses before next year and continuous flowering will be an important factor in my final choice:

The cosmos in a pot in front of The Poet’s Wife has been flowering all summer; supposedly a dwarf mix, they are instead a tall single white variety and totally unsuitable to life in a pot! Ah well…

In the cutting beds,  similar Cosmos ‘Purity’ has been equally generous with flowers, but is not as attractive as Cosmos ‘Click Cranberry’:

Also in the cutting beds is a large clump of Amaranthus caudatus,  flowering since June too and providing material for several vases and numerous tactile strokes when passing by it. Like cosmos, this is SUCH an easy annual to grow from seed and has never failed me.

A similarly easy and reliable annual, also flowering for months, is this scarlet Alonsoa, a plant I discovered quite by chance when I needed to make a small purchase to get something else free; next year I must ensure I plant up some alonsoa in my bold borders to provide vivid splashes of red during the summer. Also in the picture is Aster ‘Strawberry Crush’, easy to grow but slow to flower.

At this time of year sedums come into their own, and I especially like those with darker leaves like Sedum ‘Thunderhead’, shown below in the shrub border and contrasting nicely with surrounding foliage and crab apple ‘Golden Hornet’: 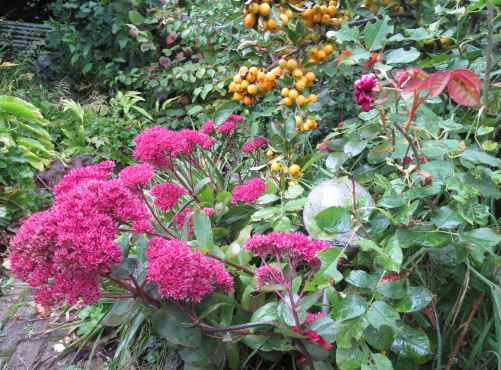 Finally, from three tiny ‘shrublets’ a couple of years ago we now have a luscious little hedge of Caryopteris ‘Heavenly Blue’, today very much appreciated by bees despite the showery weather. What a heavenly blue it is! 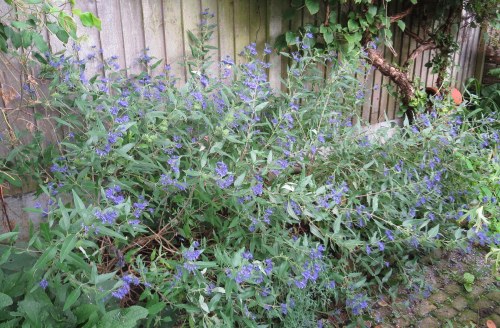 These are my September stars, a mix of annuals, bulbs, tubers, herbaceous perennials and shrubs: I wonder what blooms will have a starring role in October?