In a Vase on Monday: Snow in Summer 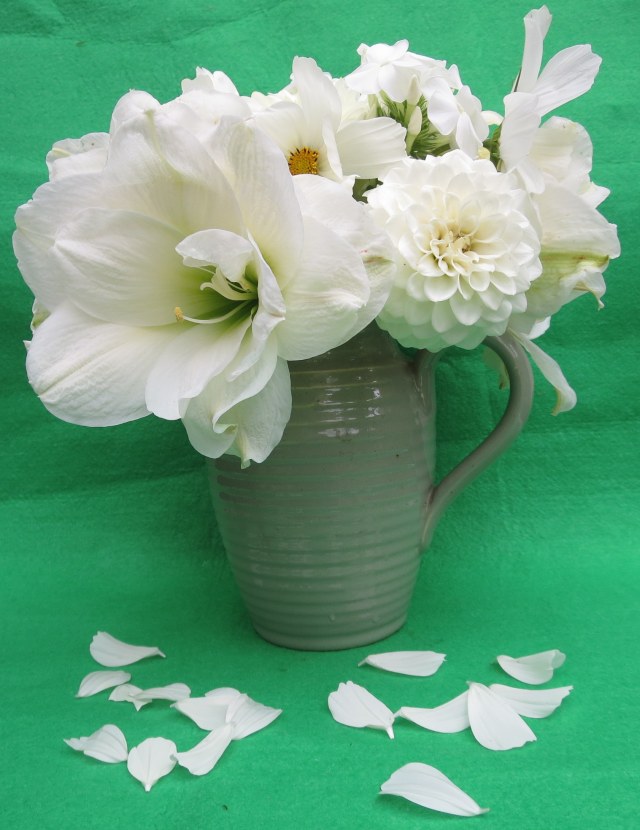 The photograph doesn’t do today’s blooms justice as in reality they look like one big fluffy snowball – and having omitted to take an overhead shot you will have to just form your own impression of their snowy whiteness.

The inspiration for the vase has been in my mind for a couple of weeks, with a very unexpected and unseasonal  bloom – can you see what it is? Yes, it’s a hippeastrum/amaryllis – blooming (outside) in August! This was the bulb that thrilled me in March last year when it produced not one or two but FOUR flower stems with very double white blooms and a hint of green at the throat, variety ‘Alfresco’. Along with other bulbs from previous years I hope for more flowers this last winter, but not having leaves let alone flowers was ready to throw the bulbs out and cease trying to get them to flower again – but was instead persuaded by Joanna to put all the used bulbs in one pot to make watering and aftercare easier. Finding an emerging flower spike a few weeks ago was certainly not anything I had anticipated!

Even though the stem was immediately earmarked for a vase it wasn’t until vase preparation day that its companions were chosen and I had no preconceived ideas for these – but the glorious white purity of Dahlias ‘Snowflake’ and ‘Karma Serena’ easily won the day, ably assisted by equally white and pure Phlox ‘Rembrandt’ and Cosmos ‘Purity’. Spent heads of Daucus carota for green contrast and texture were rejected as just not in keeping with the white frothiness of the blooms, the weight of which required a solid based vase. This sage green jug seemed to do the trick and cosmos petals hinted at newly fallen snow.

Whether containing the unexpected or not, a vase on Monday is a great way to start the week, bringing simple and subtle pleasures, so why not join us by finding material from your garden to pop into a vase or jam jar today and share it if you like by leaving the usual links to and from this post. 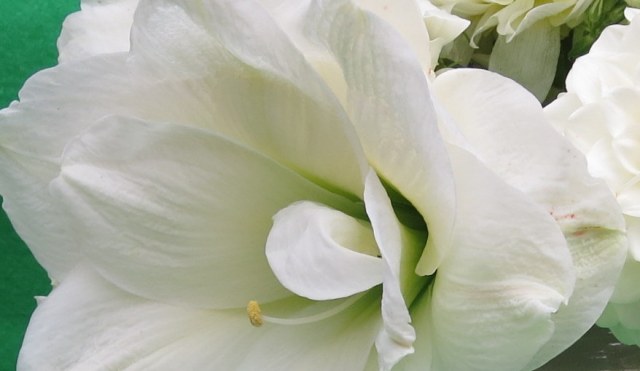 Like Loading...
This entry was posted in bulbs, corms and tubers, Gardening, Gardens, In a Vase on Monday. Bookmark the permalink.

86 Responses to In a Vase on Monday: Snow in Summer