The Rector Steps Aside

As I mentioned the other day, once Rambling Rector finishes flowering the petals drop in thousands and for the last few years to prevent  build up of deadwood I have cut out all the flowering stems later in the summer, thus sprucing him up in both the short and long-term. With two group visits to come this month I decided to bring his appointment forward, thus ridding the Golfer of his ongoing path sweeping task.

Once most of the lower flowering stems are cut out, the new stems can be pulled over and tied in place, a gradual process facilitated by a metal fencing stake which is perfect for hooking onto the high stems from the top of the ladder. There are still more to pull down and more flowering stems to access too, and you might just about make out the thickness of some of the main stems on the photo below, the Rector’s stoutness commensurate with his advanced years:

An unexpected benefit of taking him in hand at this earlier stage is that the arbour has been cleared to allow the other climbers to take centre stage – Clematis viticella ‘Venosa Violacea’, added in 2015 and suddenly making herself at home: 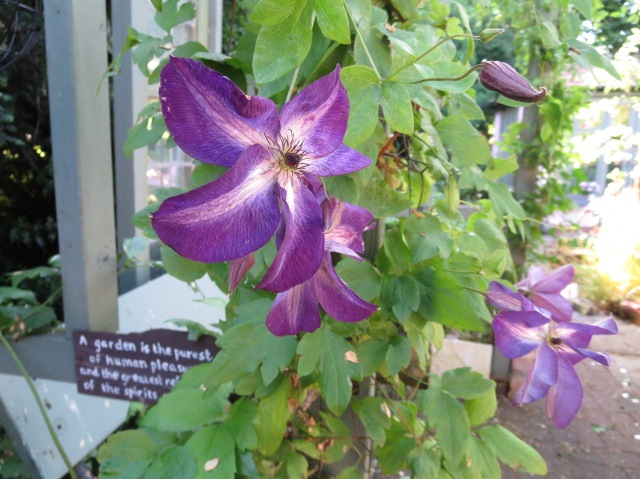 Clematis viticella ‘Alba’ (left hand post), was also introduced in 2015 and is covered in discrete green buds which will not become obvious until they open to show their white and green variation. Climbing rose ‘New Dawn’ is on the pillar on the right and is also revelling in her sunnier spot. 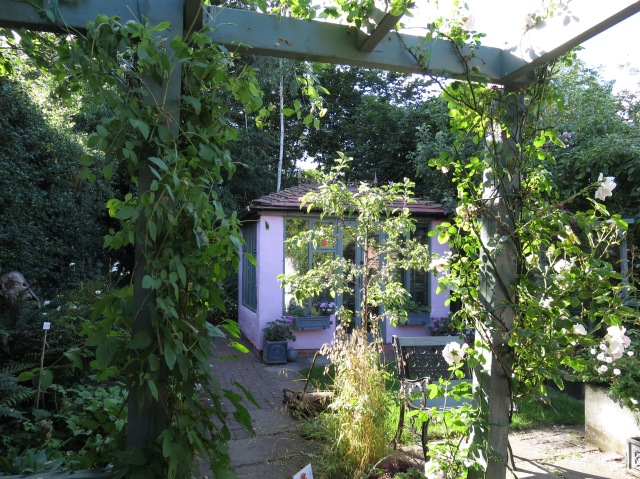 Clematis viticella ‘Gravetye Beauty’ is smothering another post and will be covered in buds and those gorgeous deep red tulip shaped flowers in a month or so. She has occupied this spot for a number of years but only began flowering profusely last year – and what a joy she is when she does flower. 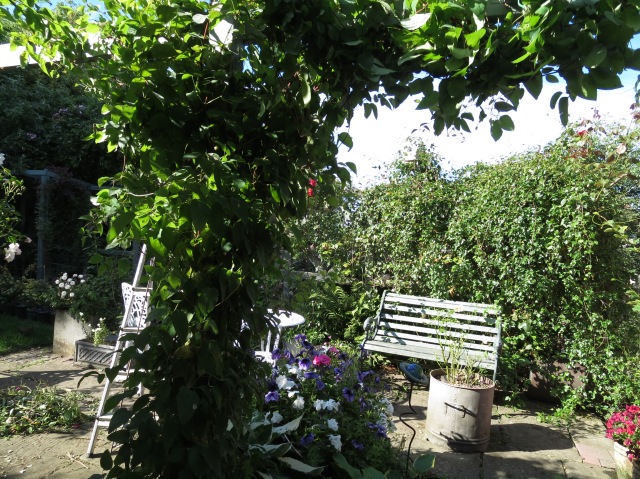 Becoming aware of the value of viticella clematis for prolonged summer colour only fairly recently, I added more earlier this year which I have shown glimpses of in previous posts. Those added to the obelisks in the shrub border are not yet thriving but I hope have not suffered from the season’s dryness. In the meantime, however, I am thrilled with the progress of the now exposed varieties on the rose arbour and will continue giving the Rector a good going-over straight after flowering in future, regardless of whether we are expecting visitors!

Like Loading...
This entry was posted in Gardening, Gardens, roses and tagged pruning rambling roses, viticella clematis. Bookmark the permalink.

13 Responses to The Rector Steps Aside