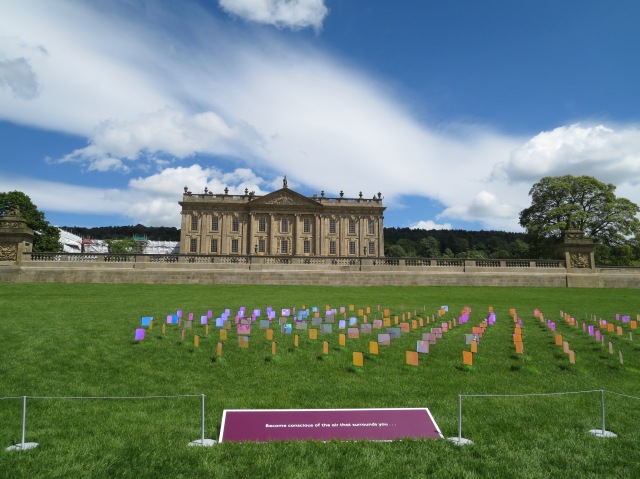 As you might have been aware from Wednesday’s wordless picture, the Golfer and I visited Chatsworth for Members’ Day of the inaugural RHS Flower Show. It was not a good start, as it took almost 4 hours (a 54 mile journey), the last couple of hours spent in mostly stationery traffic all but 2 miles away from the venue – heaven help any locals caught up in Show traffic! The previous day, Press Day, had been cut short at 1.00pm because of the wet and windy weather and marquees closed earlier for safety reasons, but with better weather forecast for Wednesday it was confirmed that the show would still open, with wellies advisable.

Following the traffic chaos on Wednesday, organisers swiftly announced additional measures with the aim of improving the situation: swifter access to the car parks, increased parking spaces and additional staff to enable faster parking on the grass, with more shuttle buses from the station. For those unable to make the venue on Wednesday because of traffic delays, refunds or alternatives have been offered, and hopefully most visitors will accept that weather conditions are outside the control of the RHS. With the general public admitted alongside members for the rest of the week, it will be interesting to see how well the site copes with the inevitable larger numbers.

So how was the show? Well, arriving at midday instead of before the opening time as had been planned was not a good start, and the majority of visitors were in the same position so naturally the site was heaving. I have not been to a major RHS show since Chelsea in the late 70s (!) but after my last visit to GW Live 6 or 7 years ago I all but vowed never to go a big garden show again, crowds restricting access to the show gardens, the marquees similarly packed and the outside stalls a very mixed bunch, including a large number of only vaguely relevant goods – and it was rather like that at Chatsworth too, albeit in very attractive surroundings.

Am I being controversial in saying this? We caught glimpses of some of the show gardens but in retrospect realise there were others we didn’t even get a peep at, not helped by the informal way they were arranged around the site. I am sure they were all delightful in their different ways, and there was a refreshing informality in some of those we did glimpse, but we have been spoilt with the BBC coverage of RHS shows in recent years where we get to see the gardens as complete entities, and from within, not just random sections between the crowds. I did, however, enjoy my glimpse of the Brewin Dolphin Garden, designed by Jo Thompson, outlined with flowing lines of reinforcing rods:

I did make a few purchases: merchandise from the NGS stand that I had neglected to order online as intended, miniature hostas from a golfing friend of the Golfer  and a nice rusty metal stem of cow parsley, two of which could have easily have been achieved without this visit. We readily spotted Carol Klein in one of the marquees in a wonderfully bright red coat but Jonathan Moseley could have been easily missed, standing discretely and unassumingly on his much talked about Palladian Bridge, the willow snake adorned with flowers and succulents designed to challenge perceptions of what constitutes a pretty arrangement and as a homage to the constantly developing gardens at Chatsworth. 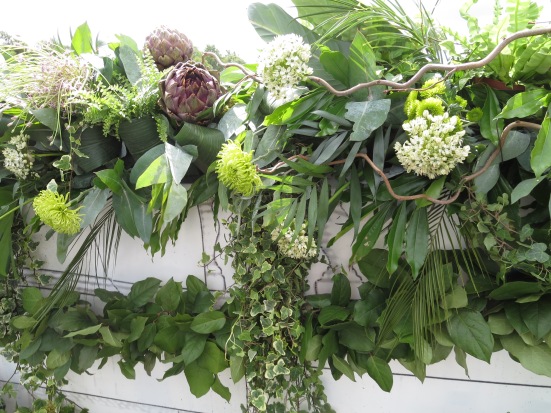 I was pleased to have a tiny but this time adequate glimpse through the various peepholes of the presumably updated Antithesis of Sarcophagi, first seen at Chelsea in 2016 and now destined to remain at Chatsworth for a further 12 months. This huge cube of granite is described as ‘a world turned inside out; a garden inside a sculpture; desolation versus life; civilisation versus nature’. Through the peepholes are tantalising views of woodland plants wafting in the breeze and leaving us wanting more – such a clever idea, presumably involving mirrors.

So what I have learned, or been reminded of – again? That although it’s a lovely idea, visiting a ‘big’ garden show is sadly not as pleasurable an experience as one would like it to be – and I look forward to seeing a fuller and closer view of RHS Chatsworth on Gardeners’ World tonight. 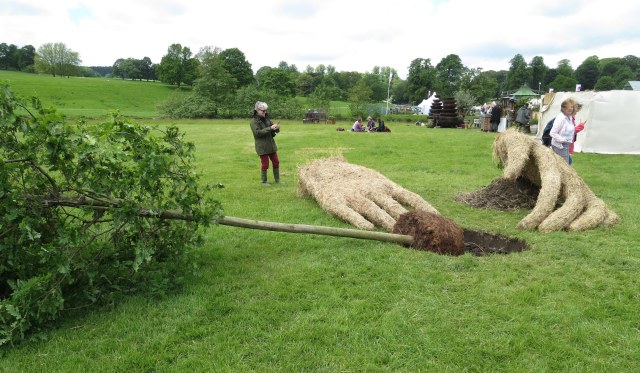 Like Loading...
This entry was posted in Gardening, Gardens, Visiting gardens & days out and tagged Chatsworth Flower Show. Bookmark the permalink.