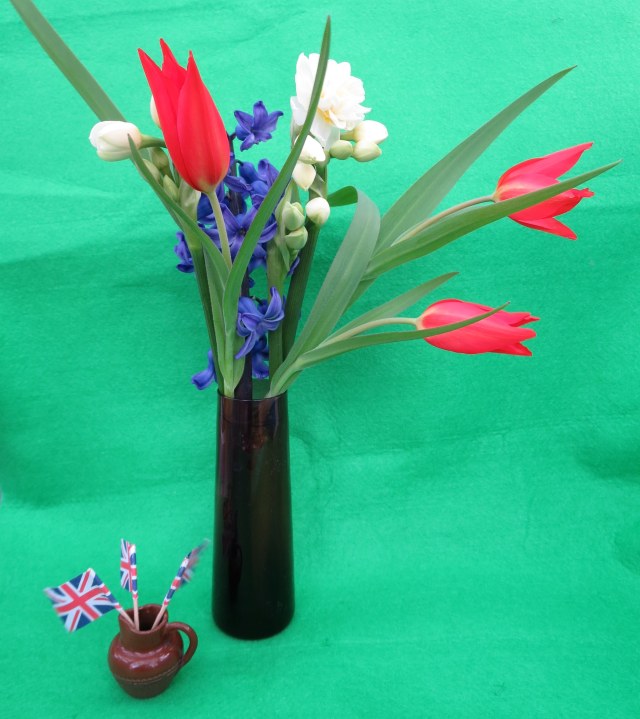 There is no patriotic intent in today’s post, but the colour of the blooms instantly reminded me of the Union Jack flag and it just so happened I had these tiny flags purloined from celebrations of some royal event, probably the wedding of William and Kate in 2011. This was in my still-working, pre-blogging and definitely pre-IAVOM days so there were no thoughts in my mind at the time about using the flags as a prop, but the fact that I kept them clearly says something about my mild (?) squirreling habits. 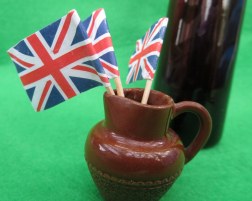 The red, white and blooms that shouted “Pick me!” this week were some stylish species tulips, Tulipa praestans, Narcissi ‘Erlicheer’ and a hyacinth spike from a bulb replanted in the garden after indoor forcing one year. I had all but given up replanting these previously forced bulbs to avoid the danger of the garden being overrun by recycled hyacinths but having seen this and a lovely group of the beetroot red ‘Woodstock’ variety flowering this year I may well restart the habit.

The blooms demanded a simple, slim and shortish vase, and this deep heather glass vase wasn’t quite the right colour but otherwise fitted the bill. Reluctant to restrict the vase to these bright beauties however, I created a second equally bright and patriotic looking vase 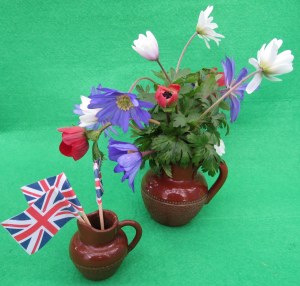 using white and blue Anemone blanda and the first few blooms of some of the red Anemone coronaria that were used for Younger Daughter’s wedding last year. Now that buds are forming, I was pleased also to see that at least one of the blue ‘Mr Fokker’ anemones has survived for another year – hurrah! The smaller blooms were popped into a slightly larger version of the miniature jug that holds the flags, both probably tradesman’s samples of nearby Bretby Pottery.

I have given away posies of Anenome blanda to a couple of friends in recent weeks who tell me they have lasted a week, and the A coronaria ‘Sylphide’ from last week’s vase lasted a whole week too, along with the bergenia stem, so that’s useful to know. Sharing this sort of information has proved really useful amongst IAVOM fans, which is why we look forward to sharing each other’s vases every week. Do consider joining us this week if you haven’t already done so – see what you can find in your garden or forage locally to pop in a vase or other container and share it with us by leaving links to and from this post. Thinking ‘out of the box’ is always encouraged! 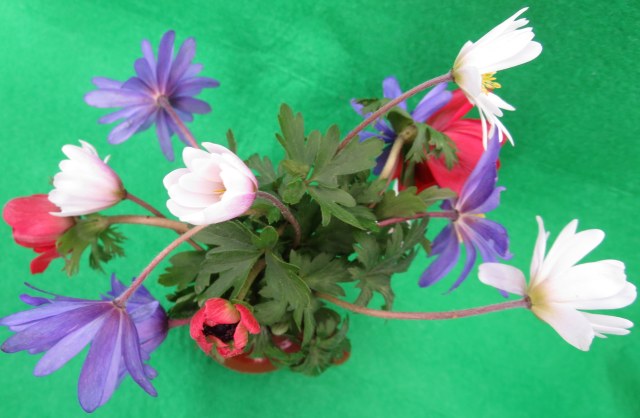 Like Loading...
This entry was posted in bulbs, corms and tubers, Gardening, Gardens, In a Vase on Monday and tagged Anemone blanda, Anemone coronaria, flowers in a vase. Bookmark the permalink.

65 Responses to Ina Vase on Monday: Flying the Flag