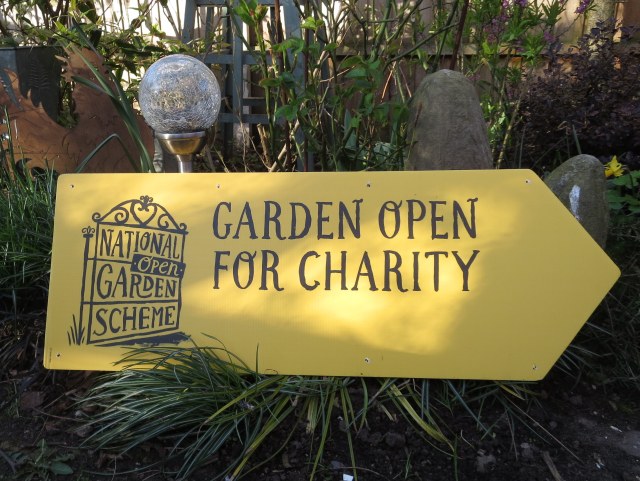 Kate of Barn House Garden talked recently about receiving the promotional material required for opening her garden under the rebranded National Garden Scheme; on Sunday, The Golfer and I attended the Staffordshire, Birmingham and West Midlands ‘county’ lunch (although technically we live in Warwickshire, right on the boundary with Staffordshire… and Derbyshire, oh and Leicestershire too!) where we picked up our promotional bits and pieces – and had an extremely nice lunch as well! It was also a wonderful opportunity to meet other gardeners and lovely that many of them made a point of chatting to us because this was to be our first time – thus a great chance to pick people’s brains and get advice on all sorts of issues related to opening our garden for the NGS. The Chief Executive of the NGS, George Plumptre, was in attendance to talk about the funds raised (£3.5 million in 2016, a HUGE amount, and interestingly the NGS is the major benefactor of all the charities supported) and present long service towels for 10 years of  opening, and forks for 30 years. The fork, I think, will be beyond our grasp…

The excitement and anticipation of opening has been with me since we were first accepted for the scheme, way back in July last year, not diminishing even throughout the winter months as I continued to do as much in advance as possible, whether it be planning the logistics or preparing non perishable things like plant information labels. The lunch, however, and the fact that it is now only 3 months till the openings not surprisingly heightens the excitement, but also brings an awareness of how much there is still to do before then! The garden is doing its best by doing what it does best – growing! – whilst I am assisting by continuing to cram the greenhouse with seedling and making up (in a disciplined way of course) for not buying plants last year. A large order from Claire Austin has been planted up in the last couple of weeks, whilst this week my order of dahlias, lilies and some herbaceous plants arrived from Peter Nyssen as well as clematis from Thorncroft for the obelisks in the shrub border and a couple of posts. The clematis have to be hardened off for a week or two but all of the others have been dealt with almost immediately to give them the best chance of settling in as quickly as possible. 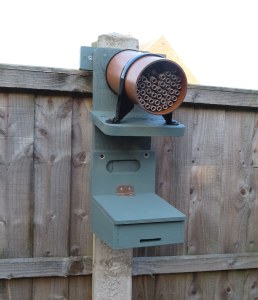 There will be no more bulk purchases of plants this year, but when not trying to keep on top of pricking out and potting on there are numerous other tasks to prevent me from idly twiddling my thumbs. Having had an email from Mason Bees UK to say that our cocoons were being dispatched, some last minute painting of their home was required, before it could be erected in the garden. New advice on how to install it meant a last minute bit of construction by the Golfer so the nesting tubes could be angled downwards to help drainage and for the release box to be attached underneath, but it is up now and the cocoons are currently incubating prior to (hopefully) hatching. I shall write about these bees more at a later date, but in the meantime do look at the website or see Jen of Duver Diary’s series of posts about her mason bees last year. I am very grateful to Jen for introducing me to the Mason Bee Guardianship scheme, which should be an interesting and worthwhile experience.

Painting has extended beyond the bee’s home to our own, with the garden opening encouraging a long overdue painting of our exterior woodwork and, when the weather permits, the very much larger task of the walls although the gable of the extension is a priority and needs to be done before the wisteria trained across it begins budding up – which means SOON! In the meantime, and before the required scaffolding is set up, I am getting on with other minor improvements, such as those that followed the edging of the heuchera bed with tiles – this job begot (with off cuts) the tile infill shown here which in turn begot the current work in progress, a further infill from off cuts of the first offcuts! This will take the form of a ‘starburst’ at the base of the recycled metal tree, which I don’t think has ever been shown on the blog before – made from a rainwater hopper, downpipe and various other iron artefacts from our local salvage yard.

Is there a collective noun for a group of gardeners? There doesn’t seem to be anything ‘official’ and although ‘spade’ or ‘plantation’ have been suggested neither of these seems appropriate and thus I referred in the title to ‘gatherings’ of gardeners. Last Sunday I attended a gathering of local NGS gardeners but I am taking up the suggestion of some fellow garden bloggers and offering to organise an informal get together in London around the time of the Chelsea Flower Show in May, perhaps the Sunday or Monday (21st or 22nd) before it starts. Would anyone be interested in this? Do let me know, as it would still be worthwhile even for only a handful of us.

Like Loading...
This entry was posted in art in the garden, garden blogs, Gardening, Gardens, projects and tagged mason bees, meeting bloggers, NGS. Bookmark the permalink.

33 Responses to Gatherings of Gardeners