In a Vase on Monday: Nodding in the Wind 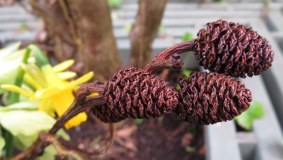 I picked up these alder catkins in a car park after Storm Doris had passed by with the intention of using them in a vase and here they are, along with nodding accomplices Hellebore foetidus, the first Tête-à-Tête and dangling catkins of  twisted hazel Corylus avellana ‘Contorta’. 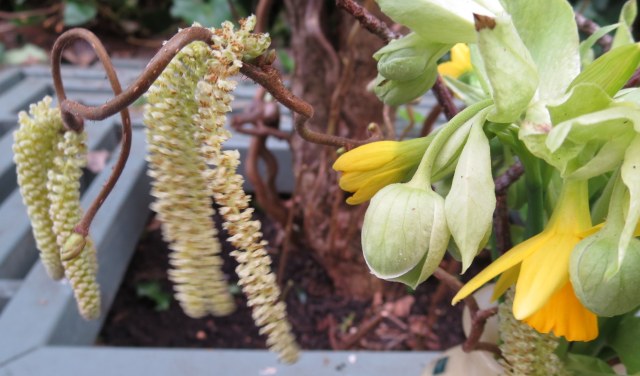 Ideally, I would have had one of those little toys with a spring in the base which you press and the articulated character standing on the base would nod its head or get up to various contortions depending on how you pressed it – hopefully you know what I mean! But I haven’t, so instead I just have a tiny articulated artist’s model that is temporarily missing a limb – but who sadly doesn’t nod. To make up for this deficiency I have included a book on weather forecasting which will enable me to work out when to expect the next storm, which I believe will be Storm Ewan. In the meantime, a lesser wind got up today just as the vase (Caithness Glass) and props were being arranged under the twisted hazel tree and there were a few rejected photographs of blurry catkins and displaced props. 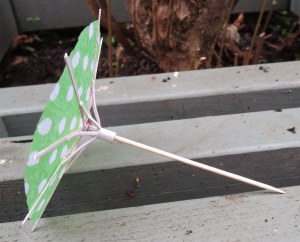 I could, of course, have included last week’s parasol ‘blown inside out’ by the wind like a tiny umbrella -but that was a belated afterthought as I dismantled the previous vase where the primroses were surprisingly still going strong, although perhaps they were mere buds last Monday. Will you be including any props if you create a vase today? Do consider it, and don’t forget to leave links to and from this post so that we can see your creation.

Like Loading...
This entry was posted in Gardening, Gardens, In a Vase on Monday and tagged alder catkins, Corylus avellan, flowers in a vase, Hellebore foetidusa 'Contorta', Storm Doris, Tête à Tête. Bookmark the permalink.

62 Responses to In a Vase on Monday: Nodding in the Wind