Garden Bloggers Blooms Day: Let’s Hear it for the Bulbs!

Carol of May Dreams Gardens hosts GBBD on the 15th of every month so I am a day ‘late’ in showcasing what is blooming in my garden around the middle of the month.

Although there is still colour and fragrance from winter shrubs, it is the naturalised bulbs that are increasingly beginning to make themselves known, such as the snowdrops in the woodland edge border shown above, which are just beginning their display and supplementing all the special ones in the border nearer the house which are mostly at their peak. Here are just four of them, clockwise from top left Cornwood Gem, Ginn’s Imperati, Walrus and Scharlockii with its split spathes:

…but having inspected my Crocus tommasinianus I was delighted to find that the emerging foliage had now been joined by emerging flowers, completely out of nowhere! These are in planted in the streamside grass but are also in what is now the shrub border but which was previously also grassed. A pleasant surprise indeed!

Also in the shrub border are those clumps of Iris reticulata ‘Katharine Hodgson’ that I showed recently, looking as if they are multiplying nicely:

Although mostly finished, there is still a little colour on some of the witch hazels but especially on Arnold Promise, which is invariably the last to start flowering although mine seemed to be well in advance of other bloggers’ specimens this year: 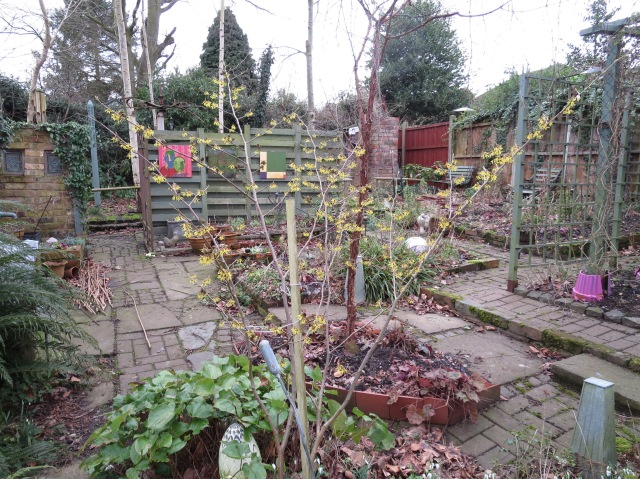 Fragrance is also still emanating from the sarcococca, unlike the winter flowering honeysuckles which have been a rather a non-entity this year:

There is almost always a primrose flowering somewhere in the garden but they are working up to their peak at the moment, shown here in the woodland:

A few more hellebores are coming into bloom now but most have still not pushed their flower buds out of the soil yet – it certainly seems as if this winter was not at all to their liking. 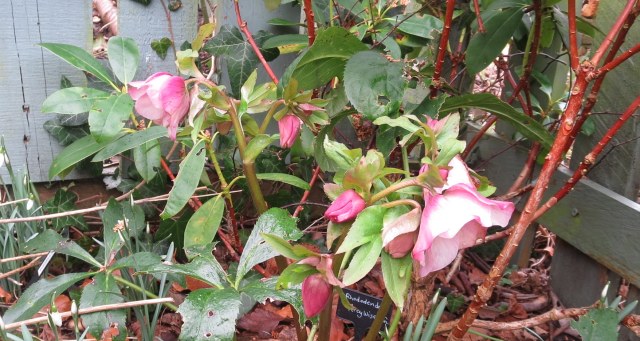 Aren’t they lovely though? So generous with their blooms and the length of their flowering period, so whenever the rest of them arrive they will have been worth waiting for.

However, I never have to wait long for blooms on my faithful friend ‘Freckles’ which, like the primroses, seems to be bloom all the year round:

56 Responses to Garden Bloggers Blooms Day: Let’s Hear it for the Bulbs!