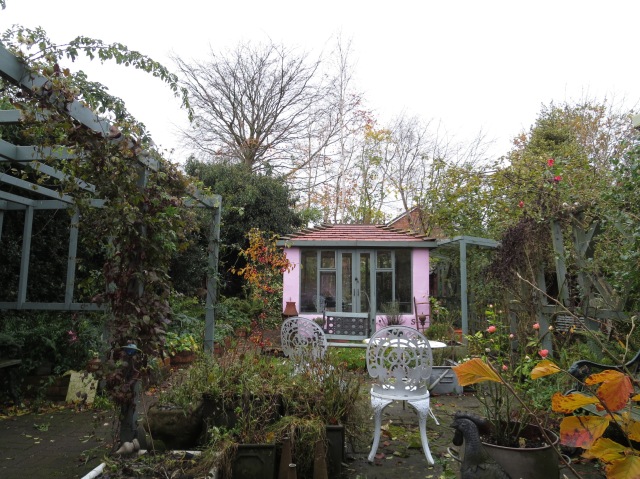 It reminds me of the story of the Gingerbread Boy, where Fox has tricked him and is carrying him over the river on his back but begins to eat him, bit by bit, with Gingerbread Boy squeaking “Help – I am three quarters gone”, then “Help – I am half gone” and so on till Fox finishes him off altogether – except here it was the leaves and the Culprit was Storm Angus! You can see that beyond the sitooterie our neighbour’s beech tree and our own little woodland are now suddenly and virtually naked.

It’s a different picture in other parts of the garden, with every plant having its own routine of undressing, and for November’s foliage day, a meme hosted by Christina of My Hesperides Garden, I decided to photograph the more interesting states of dress and undress, as not everything prepares for winter gracefully. Do look at Christina’s blog for links to foliage posts in many other gardens and learn as many of us has done the benefits of foliage in the garden. Thanks for hosting Christina!

I keep the lower branches of Hydrangea petiolaris trimmed and the result is a relatively sculptural shrub, particularly prominent at this time of year with its flaky stem and tangle of spent leaves and flowers – there is also a necklace of white bryony berries draped over it which adds to the attraction, although I should really remove it as the seedlings pop up all over this end of the garden.

I have toyed with moving this Trachelospermum asiaticum, gifted to me to replace a lost T jasminoides, but with its creamy yellow flowers is not really what I would choose for the blue & white border. However, it is clearly happy here and although growing slowly is beginning to cling to the wall behind, making an attractive framework across which Rose ‘Snow Goose’ also climbs. The foliage is consistently green and shiny although I am not sure how it would respond to a hard winter which is what saw off its predecessor.

Unlike most other things, Nandina domestica ‘Obsession’ is putting on her party clothes. Still small, she shows great potential for the future when she is more grown up, but in the meantime will no doubt enhance a Monday vase or two. 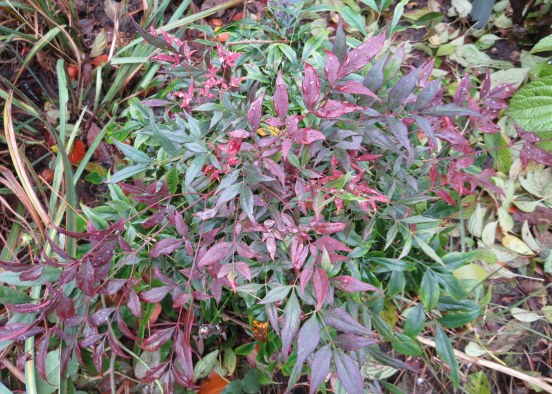 In a more sheltered position at the side of the house the twisted hazel, Corylus avellana ‘Contorta’, is still in a state of autumnal transition…

… and on the rear elevation the wisteria, although already carpeting the path with most of its leaves, is still going through its intriguing routine of highlighting its veins as the leaves change from green to yellow before finally dropping off and revealing the skeletal framework:

December, I fear, will present a much bleaker picture.