In a Vase on Monday: Late but Lovely

Finally, Karma Serena has obliged and produced two blooms for a vase – it seems ironic that this was the first dahlia to flower last year, appearing in a vase on July 20th, almost three months earlier than this time round. Why? I have absolutely no idea!

I wanted to keep the vase simple so as not to detract from the elegant beauty of the dahlia, having almost forgotten just how beautiful it was – pure white with a green tint diffusing from the centre. Minimal accompaniment took the form of two blooms of Dahlia ‘Twynings After Eight’ (note the hint of pink on the petals, as well as the pollen), a stem of Persicaria ‘Red Dragon’, spent heads of Sunflower ‘Italian White’ and Japanese anemone, and a dark heuchera flower spike – not quite black and white but a similar degree of contrast. 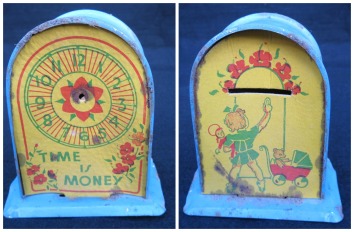 The vase was one of my numerous Caithness Glass ones, chipped at the rim – but you can’t see that, can you? It was a tight squeeze to include even these austere contents and meant that additional stems were excluded but the result is nevertheless pleasing. The tardy arrival of Serena prompted today’s prop, a vintage tin and card money box, dating perhaps from the 1940s.

I am not quite sure what the benefits are of encouraging small children to place a financial value on time, and what they would do with the time and money saved by the time their money box was full of old pennies, but perhaps working it out can be your teaser for today. If, however, you would rather spend your time more productively by picking what you can from your garden and popping it in a vase or jam jar, then please share it with us too by including links to and from this post. 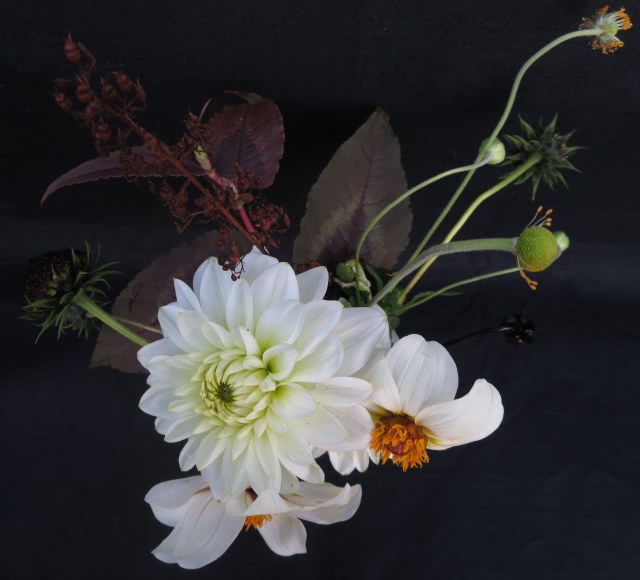 Like Loading...
This entry was posted in Gardening, Gardens, In a Vase on Monday and tagged Dahlia 'Karma Serena', Dahlia 'Twyning's After Eight', flowers in a vase, Persicaria 'Red Dragon'. Bookmark the permalink.

71 Responses to In a Vase on Monday: Late but Lovely