In a Vase on Monday: Star Attraction

With not one but THREE blooms appearing on my Nerine bowdenii ‘Isabel’, it was not a difficult decision to cut them for today’s star attraction in a vase. Having dug out all the struggling nerines a year ago and placed them in pots instead of the ground they were generally looking a little happier, but were still straggly and largely leafless. Despite this, the pot of ‘Isabel’ threw up these three blooms – but having been consigned to a temporary location out of the way in the fruit cage, picking them and bringing them inside meant I could appreciate them at closer quarters. 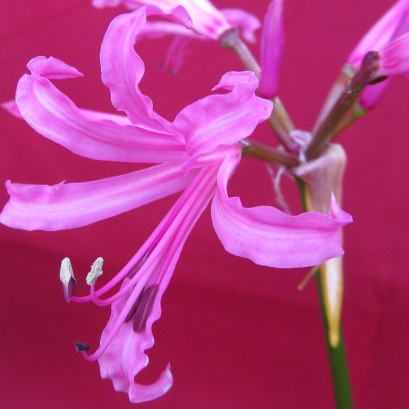 It wasn’t till after they were cut that it occurred to me I could have moved the pot to a spot visible from the house…hey ho! Nevertheless,  they look mighty fine in their tall green vase, which may or may not be Caithness Glass, accompanied by a sparkly star borrowed in an unseasonal rummage in our box of Christmas decorations. Chloris is our friendly expert on nerines, so please address any technical nerine questions to her!

The cutting beds are still awash with dahlias and other blooms, all requiring cutting to prolong their flowering, so I splashed out on a second vase which could so easily have been a repeat of last week’s but which I tried to subtly modify to ensure it wasn’t! ‘Karma Naomi’ was there again, her three blooms losing their crimson hint once the buds open, becoming a rich wine colour (I’ll have a glass of that, please), but this time supported by Dahlia ‘Purple Gem’ which has flowered less prolifically, throwing up only one flower spike at a time. Joining these main players were Dahlia ‘Twynings After Eight’, three stems of ‘Sprite Mixed’ zinnias, a double stem of Persicaria amplexicaulis ‘Alba’ and oca foliage from my token vegetable bed. I realised today I had no idea when the oca (given to me by Janet at Plantaliscious) would be ready to harvest, but having checked it is only now that it will be starting to form tubers, so that’s OK. It has had these lovely soft green healthy clover-like leaves all season, and I don’t know why I didn’t think of using them in a vase before

The zinnias were barely ready for cutting and on really short stems as I am desperately trying to encourage side shoots  by plucking them, and this dictated the stem length of accompanying material and the vase they were informally plonked in, another green glass one but with a useful fluted edge. The Karma dahlias grow on really long stems but have rarely made it to a tall vase because of the other blooms that join them in the Monday vases – I guess there will be plenty more Mondays to come when they are still around, so perhaps they will yet have the limelight in a vase more suited to their grandiose growing habits.

Both these vases will give me great pleasure during the week ahead and I look forward to seeing what others have found to cut in their own gardens or forage locally to pop in a vase or other container to bring them pleasure at home or in the workplace. Do share them with us by leaving links to and from this post.

Like Loading...
This entry was posted in cutting beds, Gardening, Gardens, In a Vase on Monday and tagged dahlias, flowers in a vase, nerines, oca. Bookmark the permalink.

64 Responses to In a Vase on Monday: Star Attraction