I am sure it won’t just be me, but does anyone else suspect that Adam Frost and his new Lincolnshire garden will become the focus of Gardeners’ World in the near future? With Adam’s increasing presence on the programme and its spin-offs and his purchase of a country property with a large garden to plan and develop, my suspicions were aroused and a visit to Barnsdale today, the garden of previous presenter Geoff Hamilton from where the programme was often based until his untimely death in 1996, confirmed it in my own mind as both Alan Titchmarsh and Monty Don have presented it from their own gardens over the years. We shall see, but of course I could be wrong!

Barnsdale is probably my most visited garden, partly because it is relatively local – about and hour and a quarter’s easy rural driving – and also because of its scale, being subdivided into ’38 gardens’, many created by Geoff for the programme to show what can be done by the average gardener with a small garden. These days you can buy planting plans of most of the gardens from the shop and many of his schemes were included in his books such as ‘Geoff Hamilton’s Cottage Gardens’ and ‘Geoff Hamilton’s Paradise Gardens’ to inspire gardeners to recreate them in part or entirety. I especially enjoy the do-it-yourself ethos that runs through much of the garden – and this is where the design for our obelisks came from:

As the Golfer has just said on seeing this photograph, his do look better, but possibly only because Barnsdale’s need a fresh coat of paint!

It is three years since my last visit to Barnsdale but I have not yet tired of revisiting and there will always be new inspiration. I learned today that these huge zinnias were Zinnia ‘Dahlia Flowered’ and that they were sown in mid April and not pinched out as they can sulk at the slightest disturbance:

and what the name of this frilly dahlia, rather bizarrely bought as an end of season bargain corm from Wilkinsons, was:

I have also come up with a couple of new schemes to enhance our own garden, nothing major though, ‘just’ a small project and a different planting idea. They will be noted down in my notebook of things to do before our NGS opening and crossed out at some stage before then! I should carry this book with me at all times as thoughts or inspiration can pop into my head at any time and I am not yet in the habit of writing them down straight away.

We nearly missed the replanted Winter Garden, completed to mark the 20 years since Geoff died; it was pleasing to see that much of this was planted with donated plants, all labelled with the donor as well as the species. In front of the border was this intriguing rustic table and chairs, surrounded with by an arc of varied heuchera: 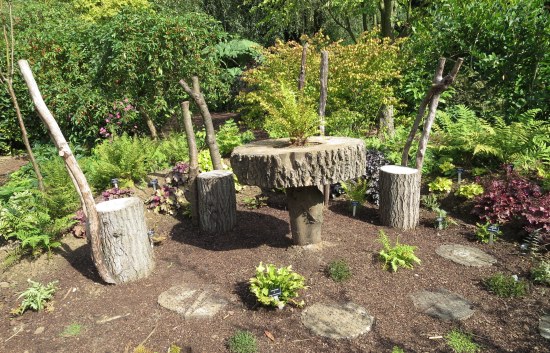 Elsewhere I enjoyed revisiting the more familiar parts of the garden, some shown here: 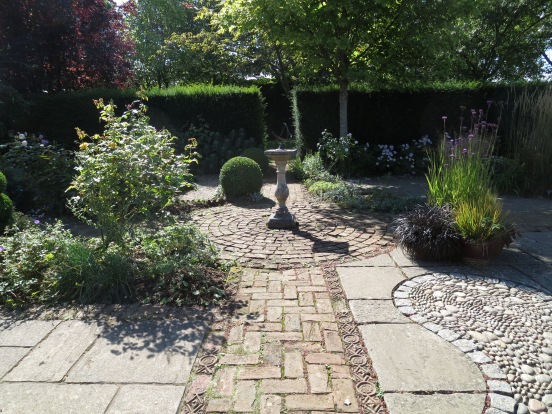 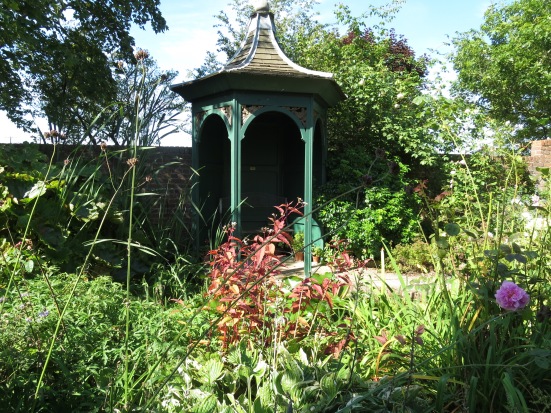 It was a baking hot day, with temperatures reaching the 80s by the time we left after lunch, but not without visiting the plant nursery as the Golfer (with no prompting whatsoever from me, I can assure you) said he wanted to buy me a plant or plants as a present, this being our 20th wedding anniversary – presents were excluded from my embargo but I still was very restrained, having learned from more than eight months of abstemiousness, and came away with just a new sedum, a salvia and a grass at approximately £1 for each year we have been together!

30 Responses to World of Gardeners