With the dahlias coming on strong the cutting beds are probably at their best now, so a brief update is called for as the first hint of seasonal changes become evident with cooler nights and a distinctly different feel to the first ramble of the day. Today, however, temperatures were in the 20s again and even gentle gardening tasks required frequent mopping of the brow – and made half-decent photographs more difficult. Above, cornflowers Black Boy, Blue Boy and White (but not the pink, which has been far less successful) have got their second wind and are now blooming more attractively on shorter stems and in the foreground ‘annual’ lavender ‘Spanish Eyes is making bushier growth but still without much in the way of flower. In the centre, zinnias are now forming more buds but perhaps too late for a star performance, whilst at the far end the asters are stunning.

In the sunflower bed, ‘Italian White’ is the only variety obligingly turning their heads towards me, whereas ‘Ruby Eclipse’ and ‘Earth Walker’  continue to show off to my neighbours. In front of them is the uninspiring Cosmos ‘Xanthos’, unlike Amaranthus caudatus which is covered in its long and droopy red tassels, although in the bed above the green variety is not performing quite as well this year. You can also see Larkspur ‘Sublime Deep Blue’ and Ammi visnaga in the corner of the first bed, not yet used much in vases this year but admired greatly nonetheless. 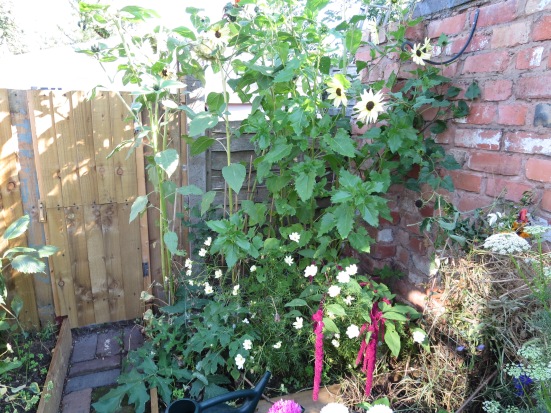 The third bed has dahlias ‘Karma Naomi’ and ‘Twynings After Eight’ in full bloom, along with two Bishop’s Children  ‘seedlings’, now in their third year. In front of them Antirrhinum ‘Admiral’s Purple’ and Rudbeckia ‘Irish Eyes’ have been flowering for around two months and show no sign of stopping. 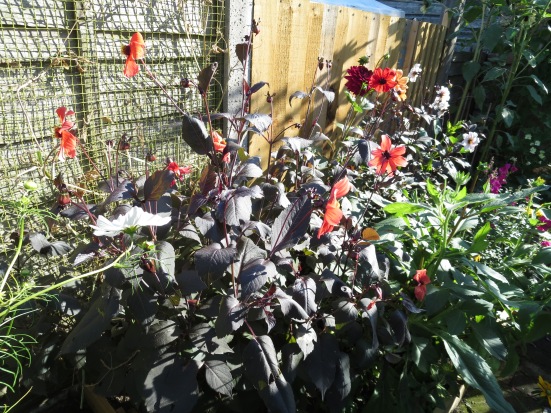 The far bed is a mass of frothy Cosmos ‘Candy Stripe’ and ‘Purity’, with annual dahlia ‘Figaro’ and Rudbeckia ‘Goldilocks’ in front, and dahlias Unknown, ‘Karma Fuchsiana’ and not-yet-in-bloom ‘Karma Serena’ behind. The sweet peas in this hot corner are all but done. 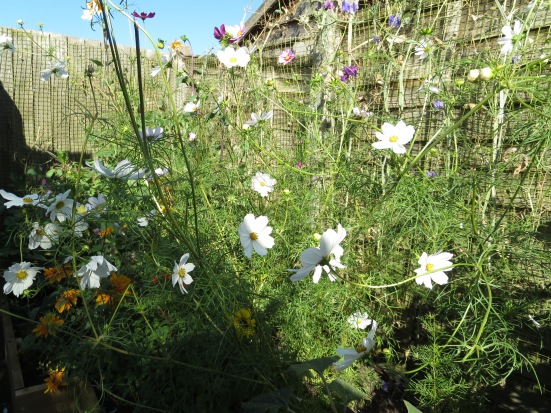 In my third season of planting in cutting beds I really feel that experience is paying off, both my own and that of other bloggers sharing their knowledge, and  I trust that a more diligent regime of deadheading, watering and feeding with comfrey tea will have made a difference too. It is a pleasure to have not only a good range of blooms for picking for weeks on end but also to observe the colour and form of these beds on my frequent rambles – just a shame that the rest of the garden is no longer quite as colourful! Meanwhile, in the smaller greenhouse the first batch of seed sowing for next year has begun, to enable the whole process to start again!

18 Responses to Bursting With Billowing Blooms