In a Vase on Monday: Enigma

After nearly a week away there was plenty of choice of blooms to cut, particularly as more dahlias are now flowering but sunflowers, rudbeckia and cosmos and others are still going strong too, and those asters! My goodness, they certainly last well in a vase as those from a fortnight ago were still looking fresh when we went away, 8 days after being picked, and I was pleased to be able to take a fresh posy of them up to my Mum’s too.

However, if we hadn’t been going away these lilies are what I would have had in my vase last week, so I thought I would give them the chance to briefly star by way of an apology for saying such unkind things about them. Despite their ridiculous height and bare stem the blooms are just as attractive as most lilies area but of course much larger, and they still give out an extraordinarily strong lily fragrance. I am not the only one who thinks the blooms are attractive, as one of the five I picked (consigned to the back of the vase) had a large chunk missing and a couple of earwigs were shaken out of them when they were cut so they obviously felt the long climb was worth it.

As a contrast to the bright and shiny pink of the five lilies, bright and shiny green stems of Sarcococca humilis (with embryonic flower buds) were added to the lead crystal rose bowl in which they were placed, and some moss plucked from our mossy rocks to fill the gaps. The bowl, now surprisingly heavy, was placed on some of the aforementioned mossy rocks which are just outside the back door to keep the distance the vase was carried to a minimum, and photographs were taken before I realised I had  not considered any props.

I am at a loss to know what to do with this tree lily – it stands out like a sore thumb and really needs a solid background behind it but the only background tall enough to set it off is the house itself and there is no sensible place for the pot to sit. It seems only fair to allow it its transient moment of glory and thinking out of the box is clearly called for.

In the course of In a vase on Monday we have all found ourselves using offcuts or prunings or weather-broken stems at times, and today’s lilies loosely fall into a similar category. I wonder what you will be using in your vases today? After a week of missing your vases I am really looking forward to my usual Monday routine of answering comments and checking out other vases, and I know I will not be disappointed – see you soon, and remember to leave links to and from your post so we can all share your Monday vases too. 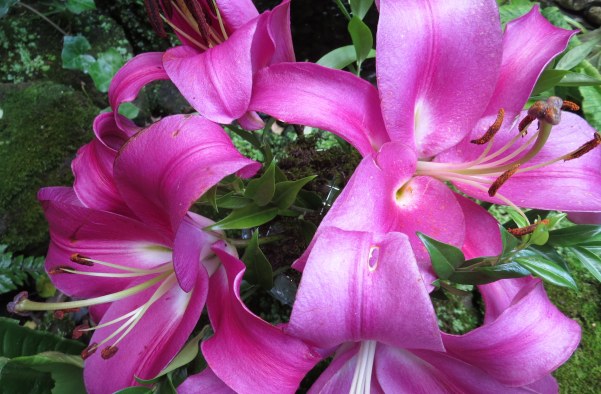 Like Loading...
This entry was posted in Gardening, Gardens, In a Vase on Monday and tagged flowers in a vase, Sarcococca humilis, tree lily. Bookmark the permalink.

62 Responses to In a Vase on Monday: Enigma