In a Vase on Monday: (Quarter) Pint Size

Having spotted three lily of the valley blooms at the edge of the hedge border I decide to celebrate their presence by using them as the basis for today’s vase. Contrary to many other gardeners’ experiences it has been a struggle to get them to establish here at all – so three  blooms can be seen as a small triumph. A similar reluctance to establish is shown by other supposedly rampant growers like pachysandra, ajuga and even forget-me-nots, none of which I am not too unhappy about, but I have hankered after a patch of lily of the valley for a long time and tried on several occasions. Poor things – I bemoan their lack of presence then pluck them as soon as they appear!

Complementing their pristine and diminutive whiteness, the little milk bottle (yes, quarter of a pint) also holds the sparse blooms of slow-to-establish Epimedium x youngianum ‘Niveum’ with a few of its leaves, the whitest flower heads of grown-from-seed Linaria ‘Pretty in Pink’, Aquilegia ‘Variable White Double’ from Touchwood seeds, a single polemonium leaf, white heads of snowy woodrush Luzula nivea and self seeded greater quaking grass, Briza maxima. I am becoming increasingly fond of both these grasses which are pretty, graceful and useful. 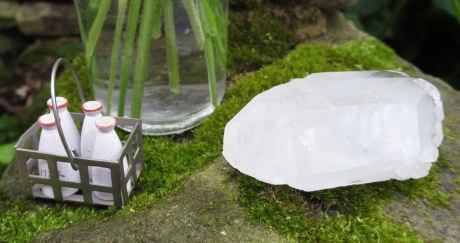 Pint size props are the tiny crate of milk bottles and a natural milky quartz crystal point, creating a display that is very different from last week’s glowing embers.

Wherever we are in the world it seems that most of us Monday vase makers are suddenly finding we have plenty of choice again – with apologies to those in the southern hemisphere who are approaching their leaner season. Regardless of the season, most of us have still come up with vases week in, week out, as we have learned how much pleasure there is to be gained by the experience. Do join us if you haven’t already done so, leaving links to and from this post so we can share your pleasure. 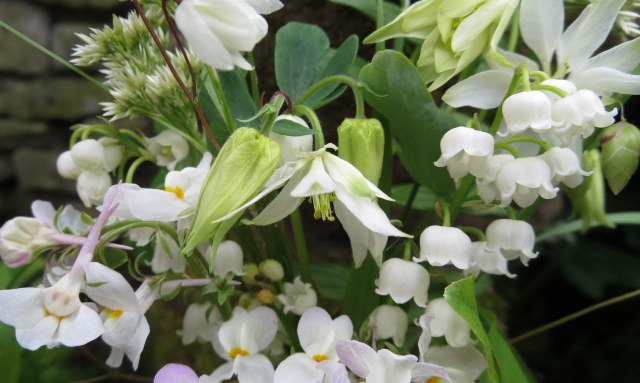 60 Responses to In a Vase on Monday: (Quarter) Pint Size