In a Vase on Monday: For the Record 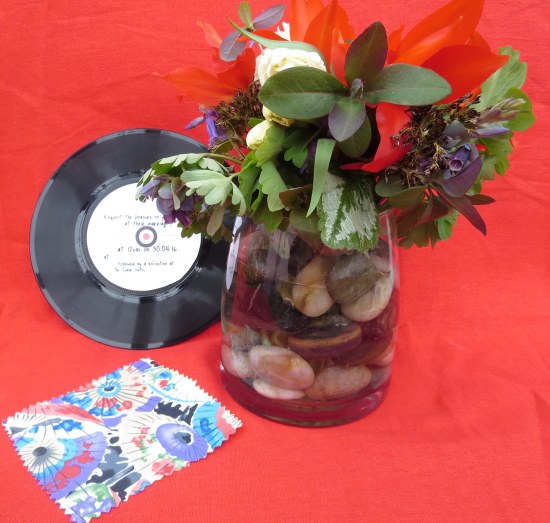 Before preparing yesterday’s practice buttonholes I had already practised the posy shown above which is now disappearing against the red background.

As with the buttonholes, I wanted to experience the process of seeking out and picking appropriate blooms and foliage, constructing a posy and giving it 24 hours out of water to check how well the constituent parts stand up to acting as a wedding posy rather than a vase of flowers. The red, white and blue blooms included Tulipa linifolia, Narcissus Erlicheer, N Bridal Crown and N Thalia, bluebells, muscari and a few sprigs of autumn sown Cerinthe. Greenery selected for the trial posy was aquilegia, honeysuckle, lamium and Luzula sylvatica stems. This process was especially useful to get a sense of the quantity of material needed to put together a posy that was comfortable to hold.

Selecting and cutting the material, trimming excess foliage and building the posy up stem by stem took less than an hour in total, after which I had to enlist the Golfer’s help to slip a rubber band around the stems to hold them together before an alternative means of restraint could be added, in this case some natural string of which I frayed the ends. Looking at the photos below I realise that the rubber band is still in place under the string which was certainly not the intention! 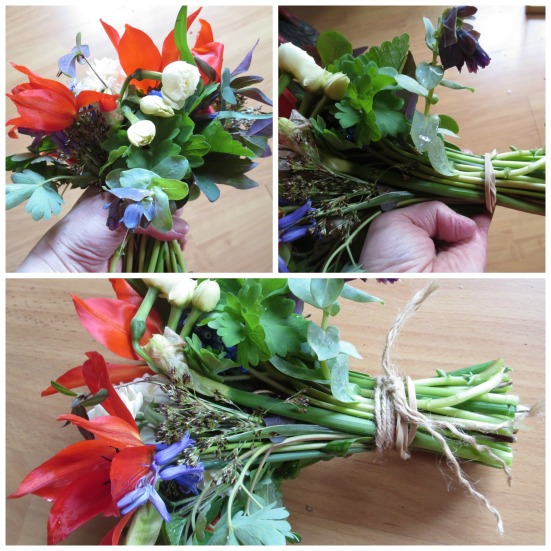 After it was constructed it became obvious that care would be needed to ensure the dominant blooms, in this case the red tulips, were equally distributed within the posy, all the more so as most of the narcissi and bluebells were still only in bud and not yet showing their true colours. The size and feel of the posy, however, seemed acceptable.

For the purpose of this post the posy was placed in a vase which coincidentally came to me filled with roses and astrantia following a niece’s wedding at which it graced one of the tables, and was held in placed by some polished pebbles. The red background into which the vase partially disappeared is leftover linen fabric from which my jacket for The Wedding has been made, whilst the adjacent swatch is the cotton/lycra of the dress; taking the task seriously, I also lined the jacket with the same fabric as the dress. The record propped up beside the vase is in fact our wedding invitation (identifiable details obscured), cleverly created by Younger Daughter from an old single record which naturally came in a personalised record sleeve!

I have thoroughly enjoyed these practice pieces and will definitely learn from the process. Indeed, I can already see that the aquilegia foliage is unlikely to make the final cut, having drooped from the start – a shame because I love its grey-green shade – but there are plenty of foliage alternatives that could be used although the blooms are still dependent on what is in flower in the days leading up to the event. In terms of timing the bride and two bridesmaid’s posies can certainly be left till the morning, probably with blooms and foliage cut the night before, but I would like to have prepared the buttonholes and basket for The Poppet prior to this.

It seems highly unlikely that any of your Monday vases will have trial wedding posies in them, but I would still love to see them. Do share with us what you have found in your gardens or foraged nearby to pop in your vases by including links to and from this post – the meme brings pleasure both in the creation and the sharing of our Monday vases so do consider joining us if you haven’t already done so.

72 Responses to In a Vase on Monday: For the Record