In a Vase on Monday: In the Hall of the Mountain King

Taking photographs for my recent foliage post when I was surprised by these spears of purple in the shrub border. Crocus have a habit of creeping up on you unannounced, particularly where  grown in grass, and after having noticed these one or two more were spotted in the adjacent streamside grass, their slim spiky leaves well camouflaged. These crocus are C tommasinianus ‘Barr’s Purple’ although I also added some Lilac Beauty ‘tommies’ in the autumn. Little did these January jewels know then that they had just earned themselves a place in a vase on Monday.

When the time came to pick blooms for the vase I did not have to look far for complementary material and snipped a couple of side stems from the nearby callicarpa, the berries just about hanging on after several months of purple-beaded glory. A handful of delicate Cyclamen coum flowers were added as they are so easily overlooked where they grow but a search for foliage was not as easy. Having found the only two green heads that were produced in the whole season on Dianthus ‘Green Trick’ I was going to include those but they looked too heavy and solid and were rejected, along with geranium and honeysuckle leaves. Visualising something light and feathery brought to me the long-lasting foliage of grown-from-seed bidens, which fitted the bill perfectly.

Petite blooms demanded a petite vase, so this purple crocus vase fitted the bill perfectly – has anyone ever managed to successfully grow a crocus in one…?! Despite snipping the crocus stems as close to the ground as possible they were still, like the snipper, on the short side so several amethyst crystals were dropped into the vase before the blooms were added – and thus the title and the setting of the vase was born.

As a crystal healer I have a number of crystals at my disposal, the most imposing of which is the amethyst geode in which the vase looks very much at home – so it was worth the effort of carrying this exceedingly heavy prop downstairs and into the garden!

Amethyst is a form of quartz that is found as crystals and masses and its purple colour is due to the presence of manganese and iron during its formation; heat from volcanic activity (or human intervention) would turn purple amethyst into yellow citrine. A geode is created where crystals form inside a hollow rock, revealed when the rock is split open, and because of their cavelike shape they are believed to both amplify and soften energy. 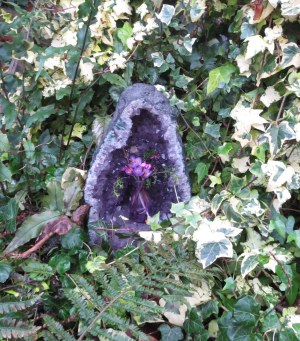 Amethyst is a fairly common crystal and can be found in the UK, particularly Scotland. It is believed to have a range of healing qualities and be beneficial for overall protection and physical, emotional and mental balance.

Placed on the rocky amethyst bed inside the geode and nestled amongst the undergrowth at the edge of the woodland, a gentle harbinger-of-spring title no longer seemed appropriate for the vase – the setting hinted at something otherwordly and fairylike and In the Hall of the Mountain King who knows what might happen…

Strange things certainly happen in the world of pigs and birds though, as I was reminded when I was writing the post. Having downloaded ‘Angry Birds’ (as one does) when I first had a 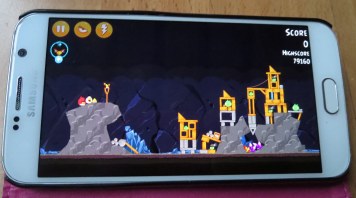 ‘smart phone’ I particularly enjoyed the ‘Mine and Dine’ level, set underground in crystal caverns with gentle music and the sound of water dripping from the cave walls. I still enjoy the occasional game but found the Angry Bird spin-offs far from satisfying and have stuck with the original.

Like Loading...
This entry was posted in Gardening, Gardens, In a Vase on Monday and tagged amethyst, crystal healing, geode. Bookmark the permalink.

82 Responses to In a Vase on Monday: In the Hall of the Mountain King