Many thanks to all of you for the best wishes forwarded to my Mum on her 90th birthday – I am hoping she will read them for herself on last Monday’s post. Not surprisingly our few family days together in Edinburgh were all the more special because of the auspiciousness of the occasion and with the coming together of several generations.

Back home later on Monday, it was clear that the chilliness of Edinburgh had been surpassed by temperatures here in the Midlands, with my greenhouse registering a minimum of -2.6ºC and plenty of evidence of the effect of heavy frosts – especially ‘Red Dragon’ who has given up for this year and flopped and, not surprisingly, all the dahlias.

The dahlias have all been lifted now and are drying out in the greenhouse alongside the few fuchsias and pelargoniums which were brought inside just before we went away. The greenhouses are rapidly filling up, the smaller one already chocabloc with seedlings and the larger one still home to some less hardy chrysanthemums. Joining them will be some of the contenders for Younger Daughter’s wedding posies for her April wedding.

Supplementing the red, white and blue Anemone de Caen (Hollandia, The Bride and Mr Fokker) and thus increasing my options are Tulipa ‘Linifolia’, Narcissus ‘Bridal Crown’ and blue muscari, making up my very late second order from Peter Nyssen. Thanks to a helpful prompt from Julie of Peonies and Posies I also arranged a late second order from Owl’s Acre sweet peas – having already sown two varieties of their ‘winter flowering’ sweet peas some weeks ago there are now scarlet, blue and white varieties too. Julie had some of these sweet peas flowering at the end of April last year and although I am later sowing them than I would have liked it does give some more options. 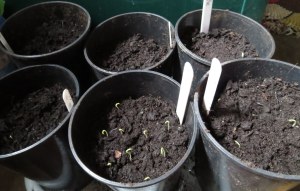 It is so hard to judge when things might flower but of course I couldn’t NOT rise to the challenge of growing the flowers myself! Some will be planted outside and some in pots in the greenhouse, with only a small degree of staggering of planting times because of the lateness of the season. I shall keep you posted of their progress!

Like Loading...
This entry was posted in Gardening, Gardens and tagged lifting dahlias, wedding flowers. Bookmark the permalink.

18 Responses to Thinking Ahead