In a Vase on Monday: Taking Stock 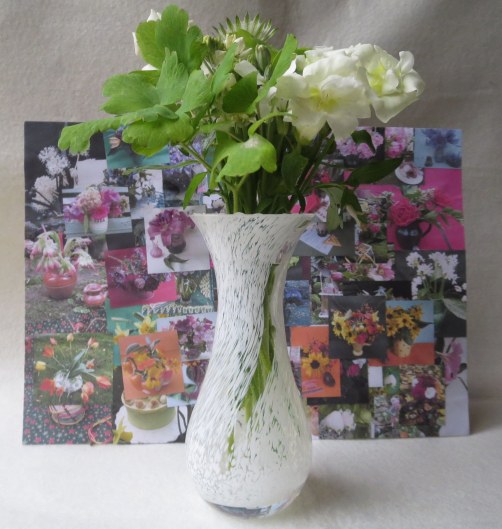 Little did I know when I sowed seeds of the white annual stock Matthiola incana in the middle of June that I would be picking blooms from them in November to put in today’s vase, albeit largely blooms in bud. And little did I know when I started the In a Vase on Monday meme two years ago this week just how addictive and popular it would become. Thank you to every one who has contributed over this time, whether regularly or occasionally, whether you create your own vase or just enjoy seeing and reading about everyone else’s. All are welcome and it has been a joy to share this journey with you.

Taking a small small handful of the young stocks and supplementing them with long lasting blooms of Antirrhinum ‘Twinny White’ the vase was kept simple, the only other additions being a single sprig of  Astrantia ‘Buckland’ and bright green young foliage of an aquilegia, probably ‘Green Apples’. The antirrhinum was sown from seed in February and has been flowering since June; The pink version, shown in a vase in July, did not fare as well as the white but both will be grown again next year. The vase was yet another from Caithness Glass, this time a white version, and the background shows a collage of all 52 vases from the last year.

When I put the pictures together for the collage, there were several vases that prompted a double take – vases I had forgotten about since they were posted but which struck me for one reason or another. Some were so (dare I say it?) stunning in their simplicity or their perfection – did I really create those?! Trying to pick out favourites was just too difficult a task and I had to stop at the following six, clockwise from top left: sunflowers from July, late spring blooms and ribbons from May, Mum’s vase from late July, a range of pink and purple blooms from August, classic blue and white from March and the ‘old master’ vase from June. 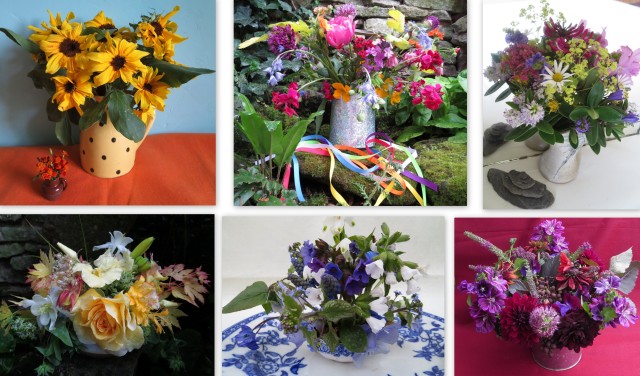 What can you find in your garden or pick locally to put in a vase today? All those who post a vase and link it to this anniversary post will be entered into a draw to win a vase cleaner, most useful for removing sediment from inside even the most compact of vases

without scratching, thanks to the soft head at the end of the brush. The draw will be made at 9.00 pm UK time on Wednesday and the winner will be announced in next Monday’s post – do join us.

Like Loading...
This entry was posted in Gardening, Gardens, In a Vase on Monday and tagged Antirrhinum Twinny, aquilegia 'Green Apples', Astrantia 'Buckland, flowers in a vase, Matthiola incana. Bookmark the permalink.

75 Responses to In a Vase on Monday: Taking Stock