In a Vase on Monday: Forever Autumn

… so once again I am filling a vase with dahlias and the best of other autumn bloomers as they may well not be here next week. 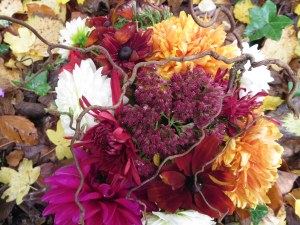 I therefore picked all dahlia blooms that were still on the ascendant and added the first few chrysanthemum blooms too, having realised after reading Anna’s and Christina’s posts last week that my ambivalence towards the latter seems to depend on the type of bloom – these orange, densely packed ‘Orange Allouise’  blooms are a no-no for me, but the more open petals of the dark red ‘John Riley’ are quite appealing. The chrysanths and dahlias ‘Karma Serena’, ‘Karma Naomi’ and Bishop of Llandaff’ were joined by as many blooms as I could muster from Rudbeckias ‘Cherry Brandy’ and ‘Rustic Dwarf’. Red Amaranthus caudatus and heads of Sedum ‘Autumn Joy’ were included to reflect the pinky redness of Karma Naomi.

As an afterthought, twigs of twisted hazel were added to the blooms in an autumnal coloured glazed jug, the bare stems seemingly hinting at the colder months to come. Joining the vase were little dishes from IKEA children’s section, part of a Chinese tea service I guess, filled with autumnal coloured crystals – yellow citrine, reddish orange carnelian and the brown and yellow banded tiger’s eye with its curious chatoyancy. The jug was photographed in the woodland, almost blending into the leafy undergrowth – so although perhaps not ideal just goes to show how autumnal the contents were.

Next week sees the second anniversary of In a Vase on Monday when everyone who posts a vase will go into a draw for a vase-related giveaway. Several bloggers have posted a vase nearly every week since my own first tentative effort, but for those who haven’t yet joined the meme why don’t you give it a try? The idea is to find  material from your own garden or foraged locally to plonk or place in a vase or other container to bring you pleasure during the week – which they certainly have done for many of us. Just leave links to and from your post so we can see what you have found – or just enjoy other people’s vases if you are not able to create your own. See you soon! 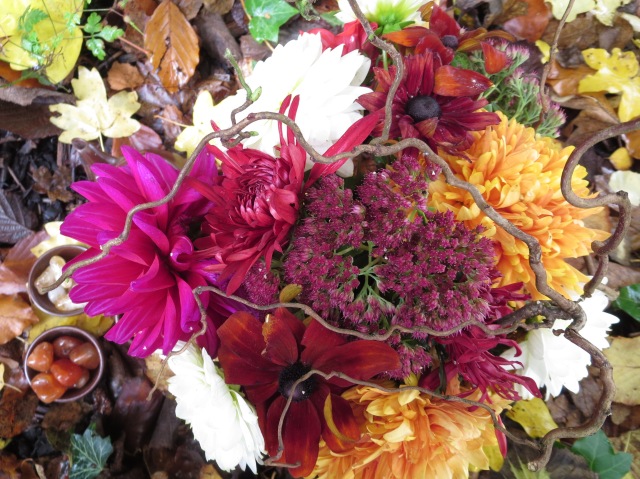 69 Responses to In a Vase on Monday: Forever Autumn