In a Vase on Monday: a Cooling Off Period 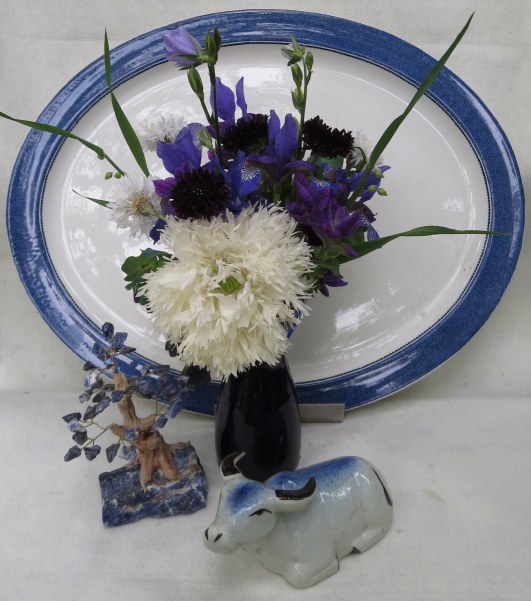 Oh what a difficult decision it was – hot and fiery or cool and calm…? There is an increasing amount of material to choose from and the cutting beds are not even in full swing yet – every ramble is a joy. In the end it was the cool and calm that won the right to fill today’s vase, perhaps appropriate following Saturday’s rain which refreshed the garden and brought with it lower temperatures. Despite June’s trend towards hotter reds and yellows and oranges and the pink of sun-kissed roses, the blue & white beds bring a cooler contrast and a ready supply of blooms for the vase. First to be picked was Papaver somniferum ‘Swansdown’ whilst still at its feathery peak and accompanied by autumn sown centaurea, both ‘Black Ball’ and an unnamed white. I learned today how easily the latter’s stems are damaged, folding at even the slightest pressure, so be warned! The dark ‘Black Ball’ has been producing flowers since the middle of May and was an instant hit, but the more recently flowering white version has a delightfully pure simplicity to it and the plants are slightly less straggly – I shall grow both again. 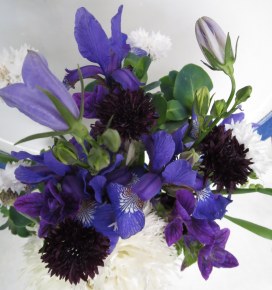 The same beds provided stems of the Siberian iris I showed a week or two ago and some spikes of self seeded campanula which were in bud when picked but quickly began to open when brought inside. The cutting beds produced the blue flowered cerinthe with its glaucous green foliage, clary sage ‘Oxford Blue’ and the first few pale green dangly flowers of Briza maxima, greater quaking grass. I grew these last year too, albeit not successfully, but nevertheless a few have self seeded although not grown as tall as this year’s counterparts. I wasn’t sure if the blue hyacinth glass would be stable enough to accommodate all these blooms, but with foliage removed and the stems tied to hold them in place it seems to work quite well. A backdrop of blue and white china in the form of a large vintage platter was an easy decision and out of a large selection of potential props I chose this sacred Chinese water buffalo which used to belong to my grandmother, acquired whilst a missionary in the Far East, and a gemstone sodalite tree. Sodalite is believed encourage rational thought and intuition, open spiritual perception and bring emotional balance and calmness – a good way to start the week! 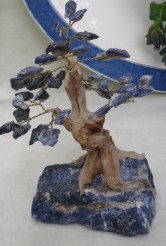 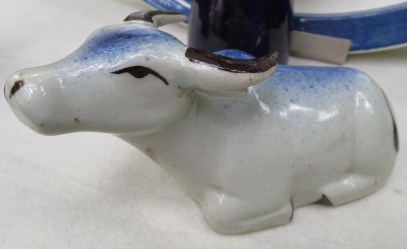 Leftover side stems of the centaurea, a short stem of iris and some unused Allium cowanii were shoved into a tiny bottle rather than waste them, and a further poppy flowerhead and last week’s honesty seedpods joined  a batch of sweet peas  on the kitchen window sill – I was still smelling the remnants of last Monday’s sweet peas even when the flowers had dried and shrivelled and am determined to prolong flowering by cutting frequently, something everyone else has done for years I am sure. Their fragrance is indeed divine. 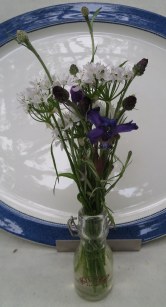 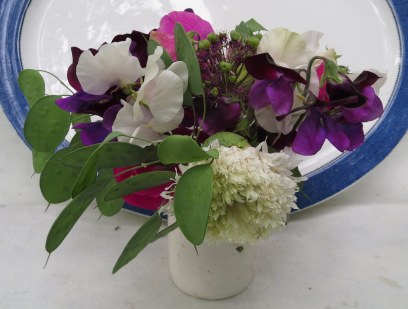 Sweet peas may well be featuring in other vases this Monday – and I am sure there will be roses too, as they seem to be at their best in many of our gardens at the moment. I wonder what else people will find in their gardens to pick and pop into their Monday vase – it is so exciting to see such a wide range of blooms and foliage and who-knows-what-else at the start of the week. Do join in either by posting your own vase or by checking out the links to everyone else’s – either way you will be most welcome and will quickly realise how addictive it is! 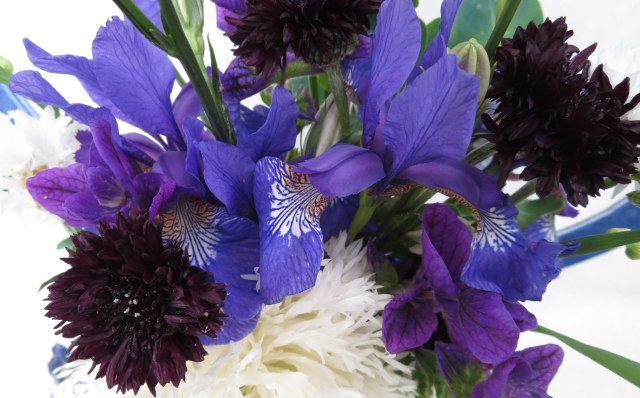 68 Responses to In a Vase on Monday: a Cooling Off Period