In a Vase on Monday: Raspberry Ripple 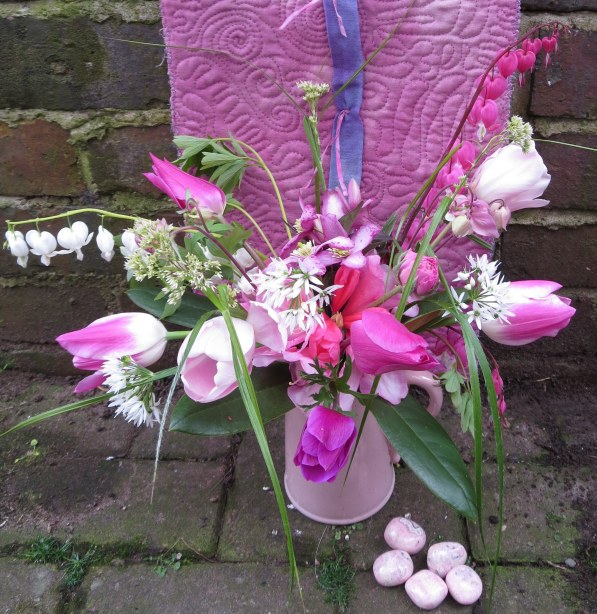 I have been almost absurdly excited at the prospect of posting a ‘proper’ vase on Monday again as I have missed the excitement while I have been away as well as all the vases you have posted in my absence. Much as I would have liked to have seen what you were up to it was just not practical to battle with sporadic internet access nor try to catch up on our return, and I apologise for not replying to comments for a little while. I am pleased, however, that everyone maintained the momentum of the meme in the meantime (great tongue twister!).

The garden has been bursting with vase potential since our return and my mind has been changed several times in the course of the week but as you can see the pinks, the dominant colour in the garden, have definitely won the day. Dicentra spectabilis is just as pretty since it has been renamed Lamprocapnos and the pink version  is arching joyously over the corner of one of the borders, its white markings giving rise to thoughts of raspberry ripple ice cream and the inclusion of white blooms in an otherwise pink vase. Choosing bedfellows was an easy task and a vase twice the eventual size could easily have been achieved, but instead I erred on the side of variety rather than quantity. 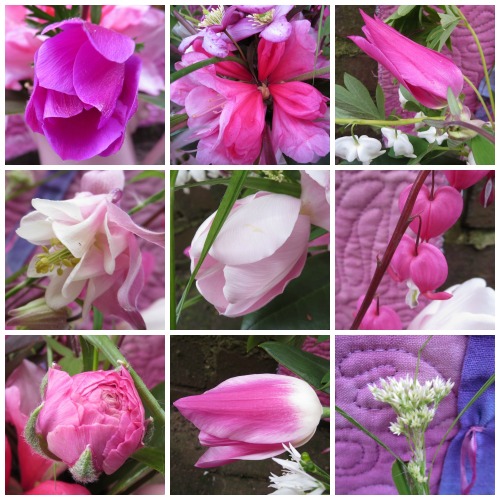 I was so excited to see the budding promise of the ranunculus as I have not successfully got them to flower before and I hope I haven’t cut this promise short by using it in today’s vase. Although some of the tulips were past their best on our return there were many others just coming into flower so I am sure they will appear in future vases. Despite last year’s dry summer the relatively young rhododendrons are budding up nicely so I could easily spare this one head and its leathery leaves – I could certainly spare the wild garlic heads and if I want to restrict self seeding by plucking the others off before they go to seed I shall have my work cut out, but this is a preferable alternative to eating them all as has been suggested to me in the past! The luzula has clumped up from nowhere and reminded me how appealing the stems, flowerheads and graceful leaves are – a great addition to any vase.

Today’s container is a vintage pink jug, which may well have been in the house when we came as I don’t recall buying it, but in the absence of rippling raspberries I had to seek alternative props to accompany it. The fabric runner was made for me by Younger Sister and was dyed with natural dyes, and the crystals are rhodochrosite, believed to bring compassion and improve self-worth.

Sitting writing this whilst gazing on the blooms in the vase sums up the very essence of why I started the meme – the garden is displaying an abundance of beautiful blooms and fresh foliage and now I can enjoy this profusion inside the house too. Pleasure indeed! What will you be finding in your garden or foraging to bring inside and give you pleasure this week? Do share it with us by including links to your post in a comment on this one and links in your post to this one as well. See you soon!

Like Loading...
This entry was posted in Gardening, Gardens, In a Vase on Monday and tagged flowers in a vase, spring flowers. Bookmark the permalink.

58 Responses to In a Vase on Monday: Raspberry Ripple