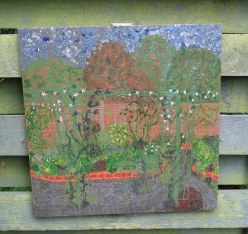 Before the current revamp of the garden, started just a little before this blog at the beginning of 2012, there was a kind of elongated archway which crossed part of the area that now has the four ‘herbaceous’ beds and which was created to support lots of clematis on the various uprights. The clematis never really thrived there so the painting on the gallery fence which shows that area of the garden during that period involved a certain degree of artistic license.

An alternative structure dedicated to clematis was therefore a prerequisite of those more recent changes and like the best ideas the ‘clematis colonnade’ was built on a whim, with  bricks, cobbles, slabs and paviors and soil recycled from within the garden where other changes had taken place. There were only two or three clematis moved to the colonnade when it was completed in late spring 3 years ago, but others have been added since with varying degrees of success. The sole spring flowering clematis was C alpina ‘Constance’, moved to a pot during construction and only now returning to her former glory, but in anticipation of future glories I ordered 7 new neighbours for her in April last year. Some arrived in flower and although I couldn’t expect them to settle in immediately they clearly have done since and are rewarding me now for my patience – so perhaps there was some wisdom involved…

Left and right from front to back, Rosy Pagoda and White Columbine: 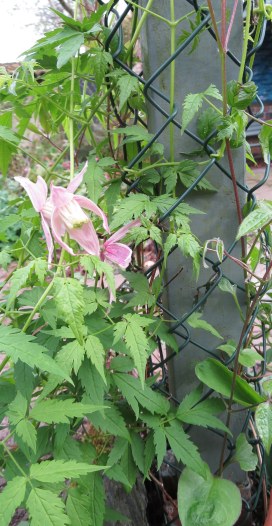 Asked if they were happy, like all good Clematis alpina they just nodded at me…

Like Loading...
This entry was posted in garden structure, Gardening, Gardens and tagged Clematis alpina. Bookmark the permalink.