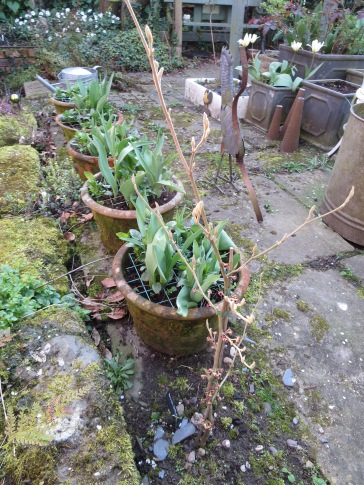 The young witch hazel Hamamelis vernalis ‘Amethyst’ that I am following for Lucy’s meme looks little different from a month ago, although the difficulty of getting such a twiggy thing in focus doesn’t help in making comparisons. The flowers are definitely all over now and the leaves are enlarging ready to open in due course. A closer view of one of the side stems show what is left of the flower heads, each flower having been made up of three little blossoms, something I hadn’t noticed before I began the monthly observation. Seed heads have formed on some of my other witch hazels in the past, so I shall be watching out for this possibility with ‘Amethyst’, although I guess it depends very much on how many pollinating insects there are around when witch hazels are in flower.

Another observation thrown up by monthly sleuthing is shown clearly on H ‘Zuccariniana’, the only witch hazel that didn’t really flower this year – three flowers are all there was, but at least it is alive and very much kicking, with leaves further developed than any other deciduous tree in the garden, perhaps because in the absence of flowers it was able to divert its resources into the leaves instead? Inspecting it frequently to see if more flowers were going to appear and comparing it to the newer varieties I have which have flowers very close to the main steam, I have worked out that the tiny knobbly bits on the side stems are where there has been a flower in the past – and that later flowers are at the end of the side stems which gradually increase in length. So Amethyst, with no knobbly bits, is a very young tree (and I know for a fact it was dug from the field at Bluebell Nurseries while I waited) perhaps only a couple of years old, whereas Zuccariniana with about 15 knobbly bits is going to be at least 15 years old – and indeed I bought it in 2003 when it will have been a mere youngster. 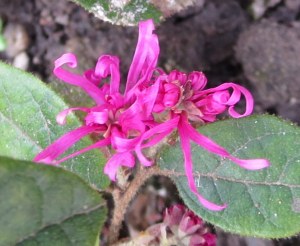 Not rocket science, but something I might not have noticed if it wasn’t for this monthly meme, so thanks to Lucy for hosting it. Do have a look at her blog to see links to the trees other people are following. In the meantime, enjoy this picture of an unexpected flower on a tiny Chinese witch hazel I have, Loropetalum chinense rubrum ‘Blush’, only distantly related to Hamamelis but with a very similar flower.