In a Vase on Monday: Having My Cake and Eating It…

I was really looking forward to using some of the species tulips that are now ripe for picking and seeking out additional material to demonstrate how clearly spring has sprung here…but no, another whim popped up and got in the way so we have an Easter themed vase instead… Perhaps it was noting that Chloris had posted a seasonal vase on Easter Sunday, or maybe the very delayed baking of my usual Simnel cake, or just the fact that the primroses are absolutely gorgeous… whatever it was, the tulips will have to wait.

I usually make a Simnel cake every Easter, not purely because it is a traditional cake for this time of year but also because I am very partial to both fruit cake and marzipan! For those who haven’t come across it,  it is essentially a fruit cake with a layer of marzipan through the middle, another layer on top and 11 marzipan balls added to represent Jesus’ disciples, Judas Iscariot not being deserving of marzipan representation. Simnel cakes have been known since mediaeval times, although the meaning of ‘simnel’ is unclear but could derive from the Latin word simila which means ‘fine flour’. Originally made in the middle of Lent for Laetere or Refreshment Sunday (later hijacked as Mothers Day) it is believed to have become a tradition for girls in service to take a cake home to their mothers on this day off. The addition of marzipan balls was a Victorian amendment to the decoration which had previously involved preserved fruit and flowers – so I seem to have unintentionally combined both traditions…

Once the cake was cooked and the additional marzipan layer and disciples added it went back in the Aga for about 10 minutes to lightly brown the surface, before the centre was attacked with an apple corer and cake and marzipan removed to allow insertion of a small ‘crocus vase’, serendipitously  removing the small portion which wasn’t fully 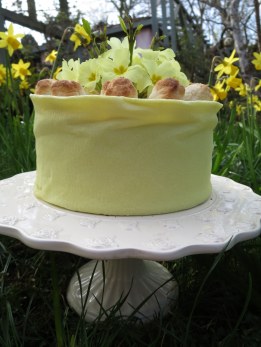 cooked. The primroses, picked to ensure they had as long a stem as possible, were trimmed to allow them to fall over the edge of the vase onto the cake, and having been picked generously easily filled the little vase, allowing space just for a few stems recently trimmed from Cornus sericea ‘Flaviramea’. Not having any appropriate ribbon, pale yellow crêpe paper from a pack of Easter shades was wrapped around the cake, perfectly mirroring the primroses, and the cake was then displayed on a china stand amongst the Tête-a-Tête narcissi on the grass near the stream, an ideal setting for this seasonal vase. I am confident that both primroses and cornus will last the week. Alas, not so the cake….

What will you have in your vase today – spring flowers, budding twigs or cleverly recycled material from previous vases or indoor plants? Many US bloggers are still waiting for their gardens to reappear from under weeks of snow and may envy those of us who now have  plenty of choice, but we have learned to be inventive with this meme and the challenge continues to motivate lots of us week in and week out. Just find what material you can from your own resources or foraged nearby, and enjoy popping them in a vase or other container today or any other Monday – and do share the result with us by leaving links to and from the weekly post on this blog.

Like Loading...
This entry was posted in Being Creative, Gardening, Gardens, In a Vase on Monday and tagged flowers in a vase, primroses, Simnel cake. Bookmark the permalink.

68 Responses to In a Vase on Monday: Having My Cake and Eating It…