In a Vase on Monday: Musical Drama 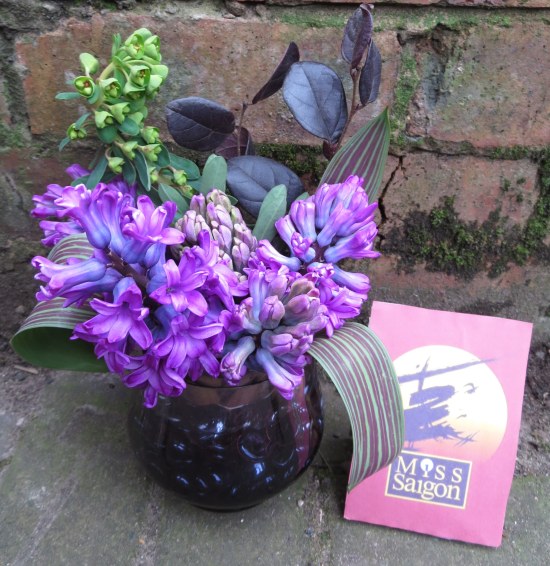 Watching and waiting have been the order of the day for a little while, observing a pot of hyacinths in the greenhouse and plotting how soon they could be used in a vase. Strangely, a pot of another variety planted in mid October were not yet even beginning to open, although the spikes were taller – these, however, were planted two months later and individual florets on 4 of the 5 spikes were unfurling promisingly, albeit still on short stems. Their time had come!

The shortness of their stems restricted which vase could be used, but having already earmarked a heather coloured Caithness glass vase this potential problem was solved by popping them first into a smaller vase which sat nicely inside the larger one. The hyacinths are actually more purple than the photographs suggest, described by Peter Nyssen as ‘rich deep violet’ – and this photograph taken indoors with flash perhaps reflects it a little more accurately, although they are still darker than this! 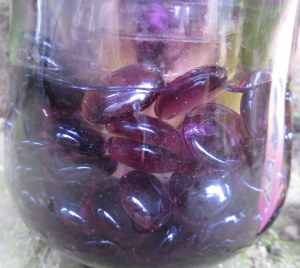 The ‘purpleness’ of the hyacinths led me to seek dark foliage to accompany them and beautiful stripy leaves of Tulip ‘Fur Elise’ were a dead cert for inclusion, as was a precious stem from the small Loropetalum ‘Black Pearl’ I bought in December. On impulse a stem of a self-seeded euphorbia was also included for the tiny dark specks on the flowers. The gap between the two vases was partially filled with decorative purple nuggets, some of a mixed bag given by a friend who knew I could do something creative with them. And the props? And the title? Have you guessed? The hyacinths are a variety called Miss Saigon…

Apart from the real life ‘rich deep violet’ of the hyacinths, the other aspect of this vase I particularly like are the tulip leaves, curling artfully inwards – and definitely looking better here than on the tulips themselves which are pretty but being greigii tulips suffer from short stems which barely poke their noses above these big and striking leaves. The hyacinths will last a good while so I shall be able to enjoy this vase all week, currently sitting alongside the narcissi which replaced last week’s hellebores after their short-lived glory in the little bottles. I can confidently report that the narcissi have definitely not been transformed into Paperpinks in the pink tinted water!

What could you find in your garden to pop in vase or other container this week? Popped, plonked or arranged, it has been fascinating to see what you all have included each week or every now and then. If you have not joined in before you would be most welcome to do so – but the challenge can become addictive, so be warned! Just leave links to and from this post so we can share the pleasure you get from your vase. See you soon!

Like Loading...
This entry was posted in Being Creative, bulbs, corms and tubers, Gardening, Gardens, In a Vase on Monday and tagged Tulip 'Miss Saigon'. Bookmark the permalink.

59 Responses to In a Vase on Monday: Musical Drama