In a Vase on Monday: Windin’ the Candle 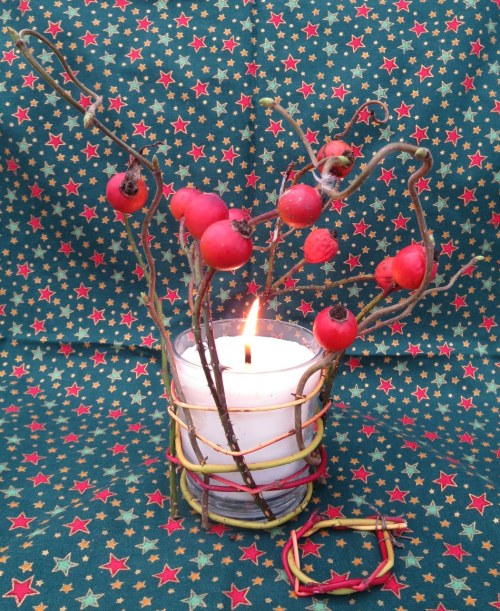 The material for today’s post was in the balance until yesterday afternoon until I finally decided to leave the Paperwhites in the greenhouse for another week and reached the conclusion that the three buds optimistically picked from a lone Rudbeckia ‘Rustic Dwarf’ on Saturday were not going to open. Plan C was to be some sort of table decoration but I didn’t really want to go down the relatively easy holly and ivy route.

The beautiful stems of the three cornus that have been moved from pots to the new hedge border really glow at this time of year and make far more of a statement in their new home than they did before. Although still small plants, I was able to judiciously snip a few of the longer side stems from all three of them – C sericea ‘Flaviramea’, sanguinea ‘Midwinter Fire’ and alba ‘Sibirica – and wound them around one of the glasses that I use to make candles (should have made the candle first of course!). Twigs of  twisted hazel Corylus avellana ‘Contorta’) and rose hip stems from ‘Parkdirektor Riggers’ were then woven vertically through the rings and a further three cornus stems plaited and tied into a ring as a prop.

The candle itself is made from soya wax and essential oils with fragrances vaguely chosen to give a Christmas ambience – mandarin, cinnamon, ginger and rosemary. Although the fragrance gives an ambience, the oils also have a therapeutic effect triggered by the olfactory nerves in the nose sending messages to the brain and this can be a physical, psychological, emotional, mental or spiritual benefit. When applied topically in a carrier oil as in massage or other hands-on therapies the effect is gained by absorption through the skin. Amongst other properties, mandarin is gentle and calming, cinnamon can ward off colds and flu and help alleviate depression and lethargy, ginger warms and strengthens the emotions and rosemary aids meditation whilst keeping the mind clear and alert. Although largely chosen intuitively, this all bodes well for a happy Christmas! 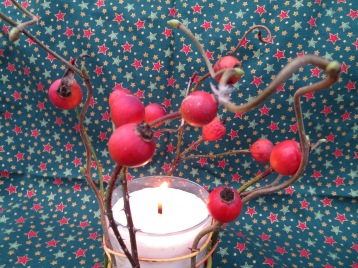 Taking advantage of a relatively bright day, the photographs were taken outside, using a starry fabric that forms a ‘runner’ on our table  during the Christmas season (on top of a red cloth with a tiny print of holly leaves) as a backdrop. The candle will burn for many hours in total as the soya wax melts to nothing,  at least 40 hours perhaps if the wick is trimmed after each use, and the subtle effect will linger even after the candle is extinguished – and all completely natural.

If you can find time to join the Vase on Monday meme today then please do – it is lovely to see what people can find in their gardens or forage from elsewhere, and today I am a little out of the box with the candle so remember it doesn’t actually have to be a ‘vase’. Just leave links to and from this post so we can share in your creation too – look forward to seeing you! 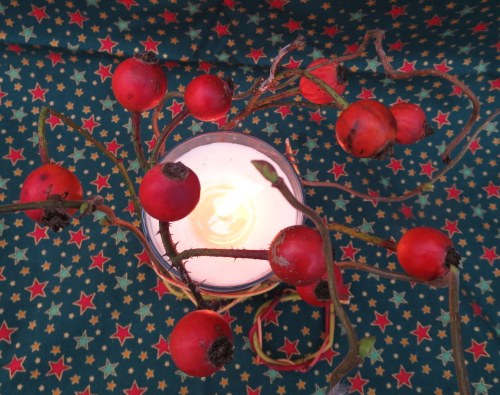 Like Loading...
This entry was posted in Being Creative, Christmas, Gardens, Holistic, In a Vase on Monday and tagged aromatherapy, aromatherapy candle, cornus, essential oils, rose hips, twisted hazel. Bookmark the permalink.

34 Responses to In a Vase on Monday: Windin’ the Candle