In a Vase on Monday: a Vase for Thomas Hood

Although Thomas Hood didn’t actually say ‘no colour’ in his oft-seasonally-quoted poem ‘November’ it may well be one of the things he had in mind when he talked about the lack of definition and cheerfulness in November. We can accept that Victorian Novembers were generally very different from those we experience now, but even so I suspect Thomas Hood can’t have been much of a gardener because, if he was, I am sure he would have been out looking for even a scrap of colour in his garden. Perhaps he was suffering from seasonal melancholia…

Originally thought I would utilise some of my roses today, but spotting the flowers on Fatsia japonica when photographing for GBBD these are what were uppermost in my mind this morning – along with the often forgotten Ophiopogon planiscapus ‘Nigrescens’. My small clump is in the rockery and probably in view from the kitchen window but I suppose its ankle level position is not in its favour. Half of the clump is now green, and I am not sure whether to take this out to encourage an increase in blackness, or whether the leaves and green berries will turn black in time – proving I don’t look at it often enough to notice!

The fatsia flowers were the first thing I have picked that required a step ladder to reach, but meant I could choose the choicest blooms for the vase. The individual florets had stems that were too short to be used on their own, so I snipped a full head, and as it was 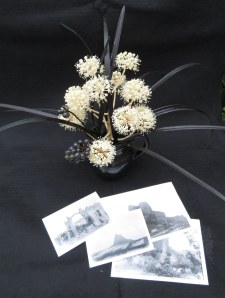 likely to overbalance because of its weight I gently pressed it onto a small pin-holder before placing it in the vase. The ophiopogon berries were surprisingly heavy too, and it was also a shame that there were only these two stems to pick as I was hoping for more. Extra leaves were cut to compensate and added to the small vintage vase, unmarked but with a very tactile lead grey textured glaze on the outside and an equally attractive turquoise glaze on the interior. I took the photographs outside against  a piece of black fabric and included a few black and white photographs as props, but the relatively successful shots of the vase were let down by the reflection on the photos….hey ho!

I love the understated elegance of this little vase, which is now holding its own next to a large vase with lilies I was given as a thank you for lunch and the vase of spent flowers from a fortnight ago. I also love this meme, and would like to thank everyone for their good wishes and support after the celebratory post last week and for all the vases and comments. There were a record 23 vases posted last week, so 23 names went into the Golfer’s newest hat and he drew out the name of Janet and her Plantaliscious blog. Janet will shortly be receiving a copy of a Blurb book featuring all of last year’s vases – well done, and thank you everybody!

Like Loading...
This entry was posted in Gardening, Gardens, In a Vase on Monday and tagged Blurb book, Fatsia japonica, flowers in a vase, Ophiopogon planiscapus 'Nigrescens', Thomas Hood. Bookmark the permalink.

59 Responses to In a Vase on Monday: a Vase for Thomas Hood