In a Vase on Monday: Black and White and Red All Over 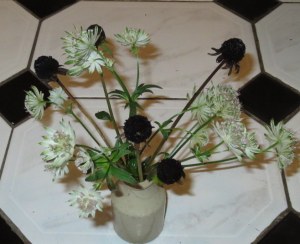 The title of this post is based on a very old and not very funny ‘joke’ which needs to be said aloud, the original answer being a newspaper or book (ie ‘read’… get it?). Today, it refers to a vase I posted twelve months ago and a year of people reading and commenting on 52 In a Vase on Monday posts.

Twelve months ago I made the effort and posted a simple vase entitled ‘Monochrome’, containing Astrantia ‘Buckland’ and the seedheads of Rudbeckia fulgida, hoping to get myself back into the habit of picking a little posy from the garden every week. Comments on the post suggested that this was a good idea and might prove an encouragement to others, so the following week I asked if anyone else would like to join me – Julie of Peonies and Posies and Christina of My Hesperides Garden were the first to do so and have loyally been posting their own vases almost every week. Since then others have posted vases regularly or occasionally with new bloggers joining the meme all the time and a record 21 vases posted last week, 22 including mine.

It surprised me just how much the meme captured bloggers’ imaginations, and I for one am thrilled by the response. Not only did it quickly ensure I got back into this simple habit, but it prompted many others to do the same, some of whom were once reluctant to pick flowers they had grown but who now find themselves willing to pick even their last or first rose or other such flower and bring it inside to enjoy at closer quarters. With it has also come the realization that vases don’t have to be formally ‘arranged’ to look effective,  that simple plonking is all that is necessary when the contents speak for themselves, and that basic tweaking soon follows naturally. 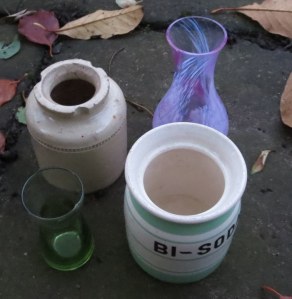 We have also learned that there are other containers that make good receptacles, so dusty kitchenalia or ornaments have made an appearance, or car boots searched for cheap little vases or containers to suit every size and colour of flowers. Many of us have found ourselves looking forward eagerly to our Monday challenge, actively considering possible contenders for inclusion during the preceding days. Foliage and seedheads, wild flowers and garden thugs, fruit and vegetables have all appeared – and thinking out of the box is applauded, the spirit of the meme being findings from our own gardens or thereabouts. Some of us have posted whilst away from home too, keeping within the spirit of the meme as far as possible, such is the addiction of the challenge.

The most rewarding aspect though is the support, encouragement and inspiration we have given each other as the months have gone by – it has been an empowering experience for all concerned and we have learned such a lot, with advice on growing or cutting or displaying, and many of us now growing some flowers specifically for cutting. We have become increasingly confident with our picking and plonking and come to appreciate just how much pleasure there is to be gained from bringing the fruits of labouring in our gardens into our homes – and giving posies of home grown flowers to our friends and families instead of shop-bought.

As for my vases, it would be hard for me to choose a favourite, and when I looked back at them there were many I had forgotten about and some that shocked me by their prettiness. I still have especially fond memories of The Blossome and the distinctive shades of Rhapsody in Blue but there were several others that brought me particular pleasure. There were contentious ones too, like the mahonia in a Sunny Oasis  and the props in Bewitched. Regular readers will know I like a ‘good title’ and for me that is part of the challenge, although I have to admit they usually just pop into my head. Throughout last winter props increasingly crept into the posts too, partially to pad out and emphasise the more limited material, but these were often forgotten about once we became smitten and spoiled for choice again. 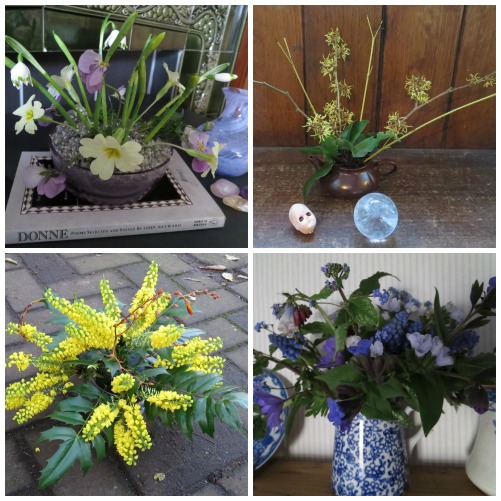 I would like to thank everyone who has joined in the meme over the year, the regular contributors and those who have commented and offered encouragement – it has more than exceeded any expectation I may have had when I posted my first vase, but this is down to all of you who have supported it in your different ways. To celebrate a year of vases I have put photographs of these 52 vases into a Blurb self-published book and everyone who posts a vase this week will go into a draw with one person winning a copy of the book (cut off time 22.00 GMT on Wednesday 12th November). The Golfer (who still doesn’t like cut flowers) will be responsible for pulling the winning name from one of his many hats and this (the name, not the hat) will appear in next week’s post. Thank you everyone – and keep filling your vases! 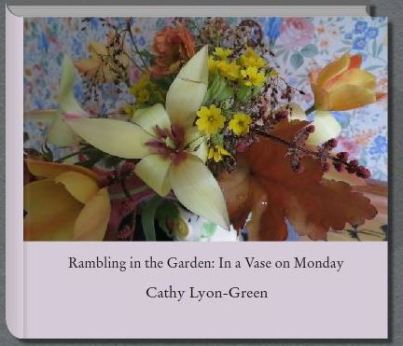 Like Loading...
This entry was posted in Being Creative, Gardening, Gardens, In a Vase on Monday and tagged flowers in a vase. Bookmark the permalink.

69 Responses to In a Vase on Monday: Black and White and Red All Over