In a Vase on Monday: The Joys of Autumn

Some of the contents for this vase were mentally chosen after photographing blooms for Garden Bloggers Blooms Day, in particular its focus, Sedum ‘Autumn Joy’. This is one of the plants that has come with me from at least one and possibly two previous gardens, not because it was particularly precious but more the opposite – it was probably one of my earliest purchases at a time when garden centres carried a limited stock and my knowledge of perennial plants was equally limited. These days it is ubiquitous and even, dare I say it, ‘common’, and with my hugely expanded plant knowledge I have many times considered removing it in favour of something more ‘interesting’. This would be unfair (as I was reminded on GBBD) because it really does live up to its name, bringing joy not only in autumn but beyond, its lingering architectural flowers making a useful contribution to the structure of the garden or a vase for many months. 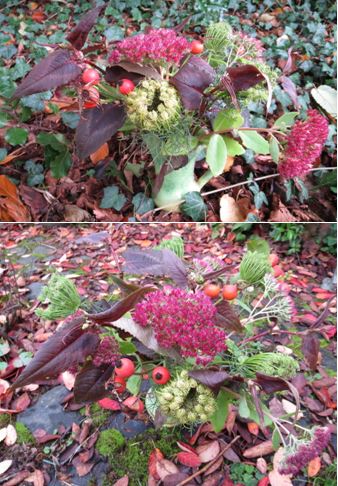 It wasn’t till I photographed the  finished vase that I realised quite how autumnal the contents were, with the vase merging (above) into the leafy background both in the woodland and on the cobbled circle under the Amelanchier lamarckii. Against the background of the wall close to the woodland edge border the contents become a little more discernable, and although chosen deliberately for their current impact in the garden, the overall autumnal impact was largely serendipitous!

Joining the sedum were seedheads of Ammi visnaga, curiously curling upwards into a cup shape as they approach maturity, Persicaria ‘Red Dragon’ and hips from climbing rose ‘Parkdirektor Riggers’. The vintage jug is one of the items of  kitchenalia that fills various shelves and a dresser in the kitchen, and surprisingly I have not ever considered it (or the neighbouring jugs hanging from the same shelf) as a vase until today. It is such a useful shape and colour and has an identical but larger brother which now may also make an appearance one of these days. 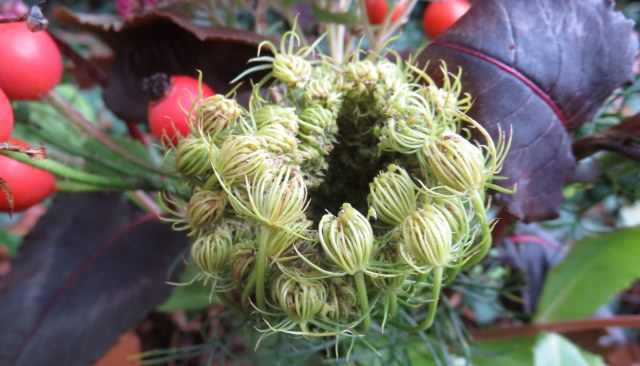 This vase just fell into place but I have to confess it was another one that was made earlier, and when it is posted we will be visiting Elder Daughter and The Poppet. Having posted a vase every Monday for 49 weeks it is too ingrained in me to miss a week, whether I was hosting the meme or not – and fortuitously, whilst checking this figure, I realised my second ever vase contained both the sedum and persicaria, and of course had used the draft title of today’s post, hence a last minute change! If you would like to join the challenge, just find something from your own garden to bring inside and enjoy it close at hand, posting the result and appropriate two-way links if you would like to share it.

Like Loading...
This entry was posted in Being Creative, Gardening, Gardens, In a Vase on Monday and tagged flowers in a vase, in a vase on Monday. Bookmark the permalink.

54 Responses to In a Vase on Monday: The Joys of Autumn