In a Vase on Monday: Stars From Another Galaxy 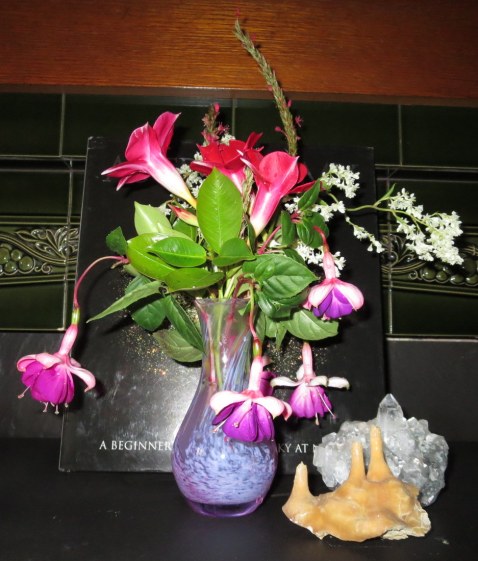 Mightily pleased that we have finally had some proper rain and look set to have a wet week, I knew that photographing today’s vase would be an issue for the first time in ages because of the low light levels – but in the damp circumstances I can tolerate them, if you can! 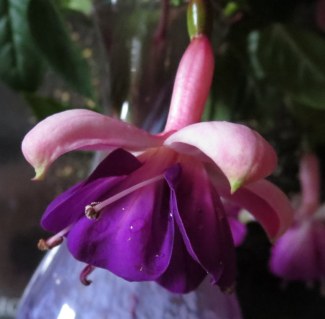 Last night I was unsure about the contents, knowing that I could easily stuff a vase with cosmos and Ammi visnaga or even a few roses and that it would look pretty enough, but that would be just TOO easy – so on the lookout for something that hadn’t featured before I made for the big galvanised tank which has been full of flowering fuchsia and petunias for weeks. Unfortunately the rain has left the petunias a little worse for wear, but there were a number of fuchsia flowers that were still dangling happily so they were first to be picked – these are ‘Ballerina’, the hugely successful result of packs from Aldi earlier in the year, 4 for £2.99 or thereabouts. Hopefully I can over-winter them in the greenhouse.

Possibly included once in a vase but otherwise completely but unjustifiably neglected on the blog are two pots with the tender climber Sundaville, which spend their winters inside the sitooterie but sit outside like bookends during the milder months – once they overcome their sense of abandonment they slowly produce more wonderfully glossy green leaves as well as these pretty flowers. Indeed the plants would happier still if they received (ahem!) a little attention over winter. Persicaria ‘Firetail’ has also rarely been mentioned, living as it does in the shadow of P ‘Red Dragon’, and its spiky pink flowers are almost over but nevertheless added a little pink spikiness to the other chosen ones. And the fourth contender? Not a star by any stretch of the imagination, but a pernicious and unwanted intruder, regularly and begrudgingly cut back – I wonder what my neighbour would say if I presented him with all the mile-a-minute (Russian vine, Polygonum baldschuanicu or various unmentionable alternatives) I had hacked off, as in theory one is legally obliged to do….perhaps I should try it….. For once it is doing something useful and adding some pure whiteness to the vase on its stiff but prettily draped stems. 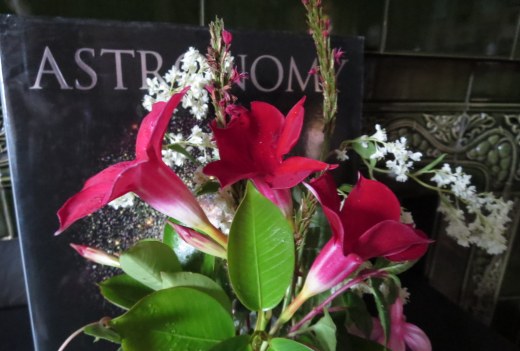 The vase is another little Caithness glass one from a car boot sale, and possibly not the best colour I realised once it was filled although the shape is perfect – I do have the same vase in a different colourway but wasn’t going to change it at this stage. The props are an astronomical book and some lunar looking crystals, stalactitic calcite and apopholyte – if it wasn’t for the book I would have taken the vase outside, but it was still raining so the photo shoot took place on the stove in the living room where reflections from the tile surround are sometimes an issue, and tried with and without flash. I am really pleased with the final effect of this vase and a little disappointed that the photos don’t really do it justice.

More and more people are enjoying this Monday meme, whether just looking or making a vase of their own – it is certainly addictive and I am now beginning to regularly add tiny vases to the bathrooms, often with rejects from the Monday vases. If you would like to join in, just make a vase with your own pickings and then to share it with include a link from your site to this post, and a link back to yours in a comment on this post – the links can be a bit fiddly if you are not used to it, but it gets easier after a while and becomes second nature. As I am not usually able to post my vase until after midday UK time do make sure you add your link to the newest post! 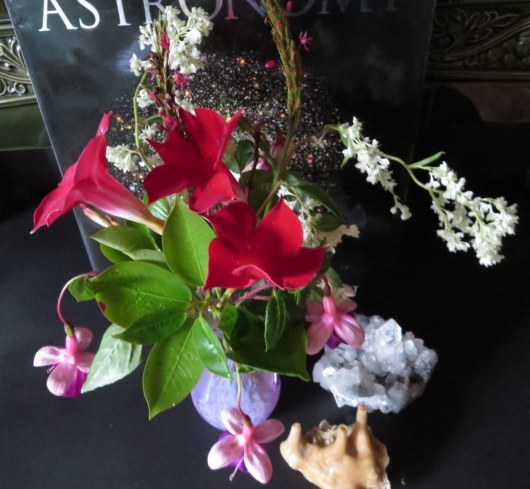 Like Loading...
This entry was posted in Being Creative, Gardening, Gardens, In a Vase on Monday and tagged Fuchsia 'Ballerina', mile-a-minute vine, persicaria 'Firetail', Sundaville. Bookmark the permalink.

47 Responses to In a Vase on Monday: Stars From Another Galaxy