…and Time Moves On 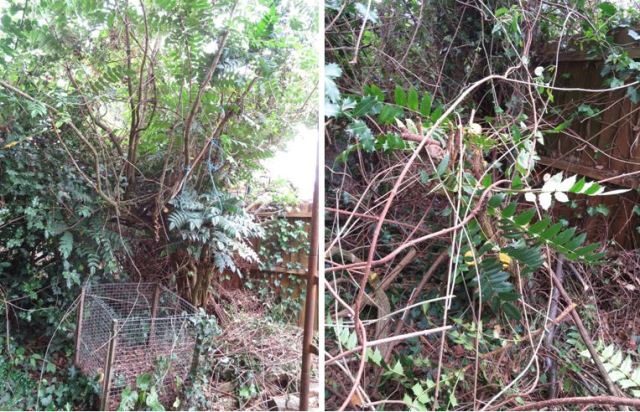 Needless to say, ever since time briefly stopped still on Tuesday and my mind went into overdrive thoughts of this corner of the garden have never been far from my mind, as possibilities and permutations flit through my consciousness. Frances was right in her comment that it is the planning and building that is my primary enjoyment and whatever the end structure is it will be used for viewing only briefly as I spend so little time sitting anywhere in the garden – which is why whatever goes in this space needs to be more than just a viewing platform, a structure that adds something to the ‘design’ (cobbling together) of the garden itself.

Despite being on high alert for ideas, it was important that the ancient mahonia in the corner was removed first, to fully open up the corner and begin to get a bigger picture of the space available and what things looked like from this previously overgrown corner. Sometime was spent considering the future of the said mahonia when it was the subject of a vase back in December, but I decided to leave it where it was for the time being – not so this time, and it was definitely in for the chop today. Bow saw and loppers fairly quickly cut it down to size, despite being hampered by a tangle of mile-a-minute creepers, but reducing the pile to manageable proportions will take a lot longer – and there will be a stump to deal with eventually too…..but the light!

There was a massive increase in light as the two trees were reduced but I wasn’t expecting so much more when the mahonia went. The sun streams into this corner from the south west, not only illuminating the main borders in a way they haven’t seen for a long time, but completely opening up the corner – so this will have to be fed into the equation too. More food for thought…..

Like Loading...
This entry was posted in garden structure, Gardening, Gardens and tagged cutting down trees, garden projects. Bookmark the permalink.

18 Responses to …and Time Moves On