Thanks to Christina for hosting this monthly meme, which encourages us to notice the foliage in our gardens as well as the blooms and appreciate that foliage is the glue which helps to stick our gardens together. I hope she will forgive me for taking a slightly different approach today!

I set out with camera in hand to record examples of foliage this afternoon but was not drawn to the patterns and textures and colours this time but more to the excess of it – something that has become increasingly noticeable in our years here as the garden becomes shadier and shadier. Conscious that we may not be as agile in the future I am keen that potential problems are nipped in the bud or, more accurately, lopped in the trunk, and when we left for our two sleeps in Surrey the wild cherry I had planted at the far end of the woodland in 2000 was on its way out, making access to the ash (planted at the same time) easier, as it will meet the same fate. Immediately, the borders to the right of the cherry regained some of the light they have been lacking – RESULT! Unfortunately the shredder, just over a year old, refused to co-operate and there are still two piles of leaves and branches blocking my rambles. 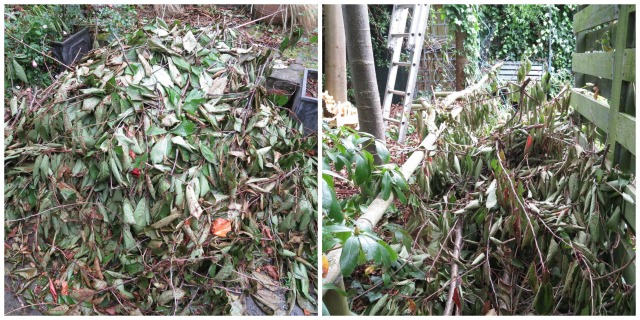 Down by the greenhouses and cutting beds the mile-a-minute vine continues to encroach over next door’s fence at a rate of two miles a minute and needs to be cut back for the umpteenth time this year – but the upside is that when this neighbour watered the tomatoes while we were away in Glasgow he realised just how much of a nuisance it was and intends to do something about it – hurrah!

On a happier note, foliage of the nearby squash shows how well the plants are growing, now beginning to cling to the upright support they were given to keep them from running rampant along the ground – AND there are finally flower buds on Ammi visnaga atop the luxuriant feathery foliage that I have been admiring for weeks:

I have a foliage dilemma, however, on the later sown sweet peas which are trained up the dead Viburnum – lots of foliage, but NO FLOWERS! Did I pinch them out? I know I did on the earlier sown ones but I really can’t remember whether these were similarly nipped….

I have already swept up some fallen leaves form the paths and I guess this will becoming a regular task by the time September’s GBFD comes around as autumn really stakes a claim on the proceedings. In the meantime, to make up for the lack of more interesting foliage in the rest of the post I thought I would finish by including this pleasing combination of unknown pulmonaria with our favourite persicaria, ‘Red Dragon’: 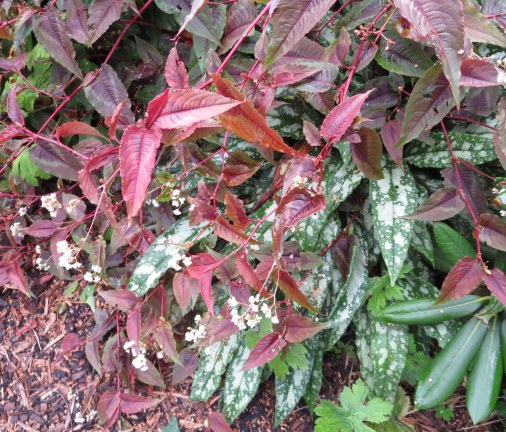