In a Vase on Monday: Not Forgetting My Greens 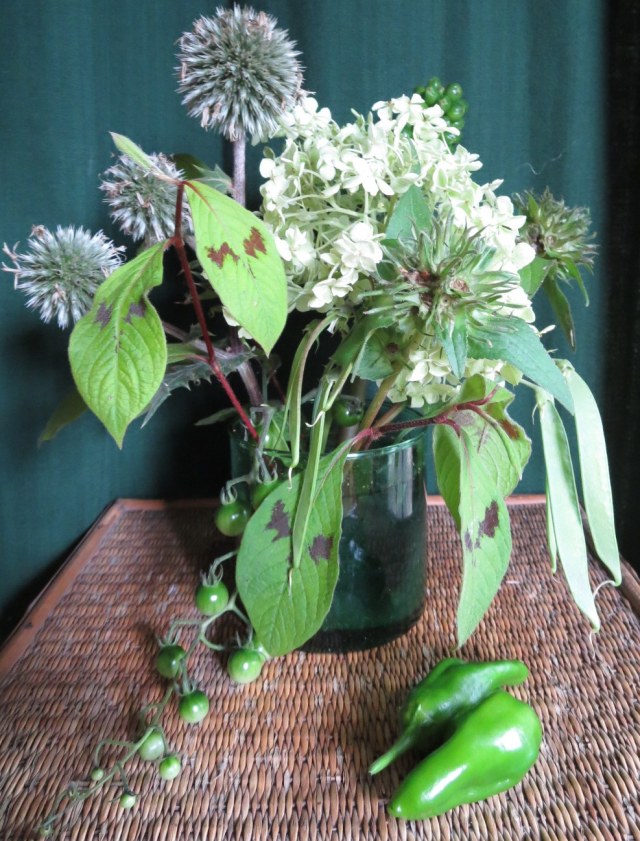 Here we are again on a Monday morning, getting the week of to a good start by picking bits and bobs growing in the garden, bringing them into the house and popping them in a vase to enjoy during the week. If you would like to do the same (and it has proved such an enjoyable and inspiring challenge) then include a link to this post in yours and a comment on this post with a link back to yours – or just pick something anyway for your own pleasure. We are not in the least bit competitive and most of us are essentially ‘plonkers’ at heart, so fancy arrangements are definitely not a prerequisite. Do join us!

I knew I intended to put Annabelle (Hydrangea arborescens) to work today, and spotting a couple of solid green seedheads on what I think is Campanula glomerata a green theme 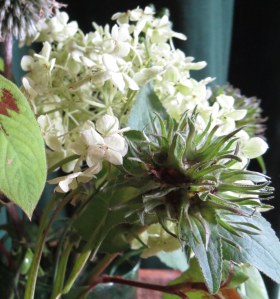 was quickly deemed to be the order of the day, although the potential pickings varied from the initial inception of the idea. I don’t think Tovara virginiana ‘Painters Palette’ (now reclassified as a pericaria, I believe) has been featured on this blog before, but perhaps it should have been with its intriguing blotchy leaves, but it has made its debut today, along with Echinops sphaerocephalus ‘Arctic Glow’, now more green than white. A sprig of unripe currant tomatoes and seed pods of everlasting pea Lathyrus latifolius were included too, with an unripe spike of Arum italicum ‘Marmoratum’ cut at the last minute from just outside the back door. Orlaya seedheads and (again) those of Crocosmia ‘Lucifer’ failed to make the final cut, although I was interested to note the latter being used in some upmarket bouquets over the weekend.

Finding a vase of an appropriate size with an opening sufficient to take the contents took a little thought and erring on the side of caution and used what I think must have been a drinking glass, inserting some florist foam cut to size, the first time I have used the latter since the very early vases. With the dark green curtains of the rear sitting room as a backdrop there was enough light for reasonable photographs as the sun was still shining, although not for much longer. Props? Apples? Too big. Beans? Too stringy. Courgettes? None. Mini peppers? Perfect!

So there is today’s vase, and once I have found a new home for the sunflower that opened in last week’s effort I can enjoy both for most of the week. What could you find to put in a vase on Monday and enjoy for the most of your week? 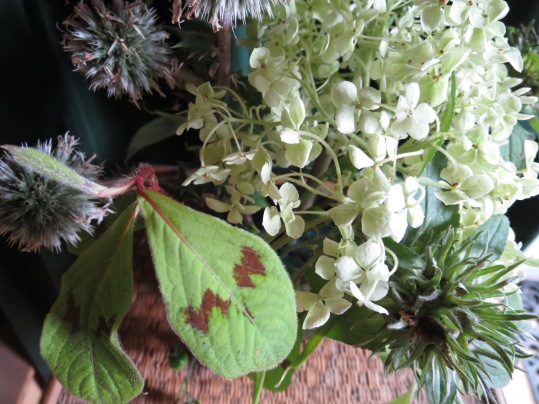 Like Loading...
This entry was posted in Being Creative, Gardening, Gardens, In a Vase on Monday and tagged flowers in a vase. Bookmark the permalink.

40 Responses to In a Vase on Monday: Not Forgetting My Greens