If I Were a Sunflower….

For the first time ever I seem to have achieved some success with sunflowers – admittedly there were a few that managed to reach flowering stage last year, but that was by luck rather than judgement as invariably the young seedlings have been ‘shoved’ in a border amidst other things, where they have got lost, eaten or just died from general lack of TLC. ‘Shoving in’ is not really recommended gardening practice…..

This year, however, young seedlings have been nurtured in the greenhouse as before, but then planted in the cutting beds (although there are a few ‘spare’ that have still undergone the shoving in procedure). Above is one from a packet of ‘Ruby Eclipse’ being trialled for ‘Which? Gardening’, and the only one so far which looks like the picture on the packet – another has a light brown ring whilst a shorter one is plain yellow. The taller ones are about my height, so short in the human adult stakes, but middling as far as sunflowers go. It looks as if they will be branching a little to give more flowers, but there may still not be stems long enough to cut. 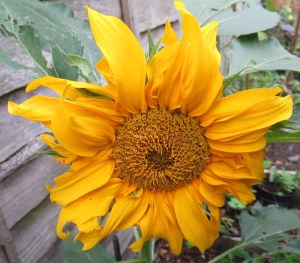 These ‘Ruby Eclipse’ have been flowering for only about a week, unlike ‘Topolino’ which started producing flowers about a month ago – bright custard powder yellow ones on small sturdy plants. They are short enough to be grown in a pot, where they will apparently grow to about 12-18″ (30-45cm) – in the cutting bed they still reach no more than 24″ (60cm), although there is a huge variation in the plants themselves, with the one on the left growing really stocky with a stem nearly 2″ (5cm) across and huge leaves – I wonder what the flowers on this plant will be like when they open?! I like the red band on the Ruby Eclipse flowers a lot but I especially like this Topolino variety for its sturdiness, cheerfulness and no-nonsense attitude. Perhaps this is the variety I would be if I were a sunflower…. 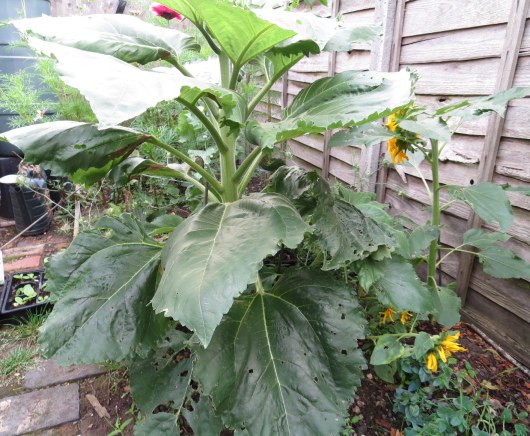 Like Loading...
This entry was posted in cutting beds, Gardening, Gardens and tagged Sunflower 'Ruby Eclipse', Sunflower 'Topolino', Which? Gardening. Bookmark the permalink.

38 Responses to If I Were a Sunflower….