In a Vase on Monday: Chartreuse 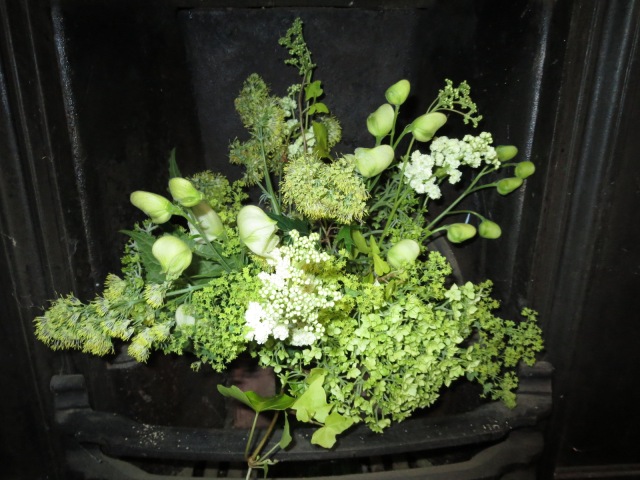 Reading between the lines over the last week would have given you a good clue to what was going to appear in today’s vase – in particular Hydrangea arborescens ‘Annabelle’, its flowers not yet fully open and still appearing as greeny white sprays before each individual floret opens to fully blousy whiteness. 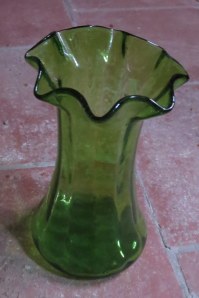 The search was on for similar accompaniments, with Alchemilla mollis a perfect choice, and something I have forgotten to use in the vases up to now. Despite their ‘poisonous’ label stems of a white aconitum (monkshood) were also cut, the buds still possessing a luminous shade before opening. The Filipendula ulmaria ‘Flore Pleno’ I have been admiring recently quickly tend to get that ‘browned off’ look once they are fully open, so sprigs of that were included before the opportunity was lost, and more of the thalictrum flowerheads were cut too before they were fully flattened (I suppose staking would help…). A leaf of Heuchera ‘Electric Lime’ was picked but then excluded as too large, so the only added foliage was some lime green ivy. The vase was yet another car boot find, green glass with a useful fluted edge – I bought a pair, but there were 5 or 6 so at 50p each perhaps I should have had them all! 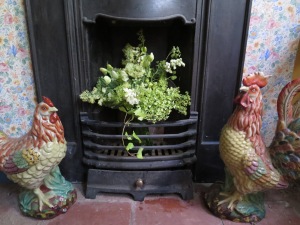 Another fireplace was chosen as a location, this one in a kind of hallway at the foot of the stairs where I built a false chimney breast from plasterboard into which the fireplace was inserted, before building in shelves on either side which hold another of the Golfer’s collections. The top picture was taken with the flash switched on, which seems to bring out the green of the contents in an unplanned way – I am not sure whether I prefer it this way or ‘au naturel’:

Neither can I decide whether the vase would have looked better if it was more minimal – perhaps with just the hydrangea and aconitum. Somehow the frothiness of the alchemilla detracts from the hydrangea’s attributes, and perhaps the reasons for including the thalictrum and filipendula were flawed – I think a postscript is called for….

In the meantime, do keep your own vases coming, linking from your post to this and vice versa if you would like to share them with others – definitely to be recommended, as it is proving to be such an empowering experience for all those involved.

Like Loading...
This entry was posted in Being Creative, Gardening, Gardens, In a Vase on Monday and tagged aconitum, Alchemilla mollis, Filipendula ulmaria 'Flore pleno', flowers in a vase, Hydrangea arborescens 'Annabelle', in a vase on Monday, thalictrum. Bookmark the permalink.

42 Responses to In a Vase on Monday: Chartreuse