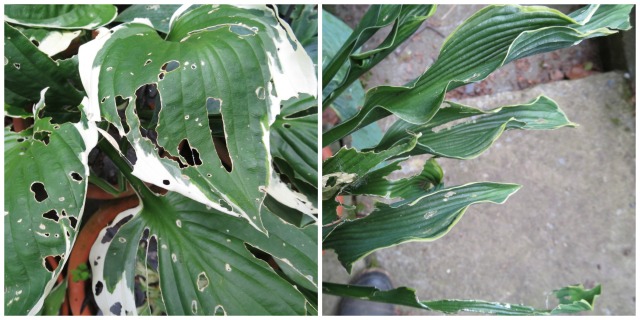 It was only a month ago that I featured pots of hostas on Garden Bloggers Foliage Day (the leafy meme hosted by Christina at My Hesperides Garden on the 22nd of every month) but many of them are now a shadow of their former selves, thanks to this year’s seeming abundance of slugs and snails. Still harbouring some reluctance to dispose of the predators (after all, slugs have to eat, don’t they? don’t they….?) I have now just left them to it, on the assumption that it can’t be as bad next year. Whilst extending the hand of mercy it has been interesting to note which hostas have been particularly or less affected – and certainly the thicker more ribbed leaves have been less badly nibbled, the critters presumably needing to consult the local dentist if they wish to partake of this tougher fare. It is untrue, however,  that H. ‘Praying Hands’ (above right) is less susceptible, needing more than prayers to keep slugs away, one assumes. Now, slugs on my clematis flowers… that’s a different matter altogether!

There is plenty of other foliage to admire in the June garden though, untouched by slugs, and I realise that today’s photos are focussing mostly on form, plants having bulked up now after their winter slumber and showing the importance of this aspect in the garden as a whole. I haven’t got many grasses in the garden yet, but increasingly am realising their value in the garden – the two pots of Stipa tenuissima ‘Pony Tails’ shown below also have texture and movement to add to their attributes: 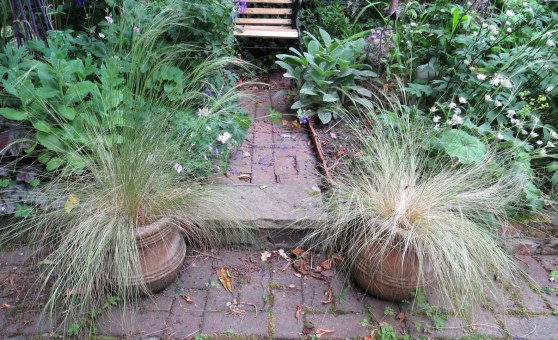 ……and whilst Luzula sylvatica ‘Marginata’ doesn’t move but just sits there it does so with such aplomb that it easily earns its place in this border, requiring no attention whatsoever except the occasional word of praise:

It’s lily-livered cousin Luzula nivea is not so set in its ways and being young she does try it on a little, but she is an attractive young lady and is always on hand to help with a vase on a Monday:

I am fond of my pulmonarias throughout the year but now that the flowers have finished and they have spent time preening their foliage who could resist the wonderful clumps that an established plant can develop into? This unknown variety has formed a pristine clump over 2 feet (60cms) across: 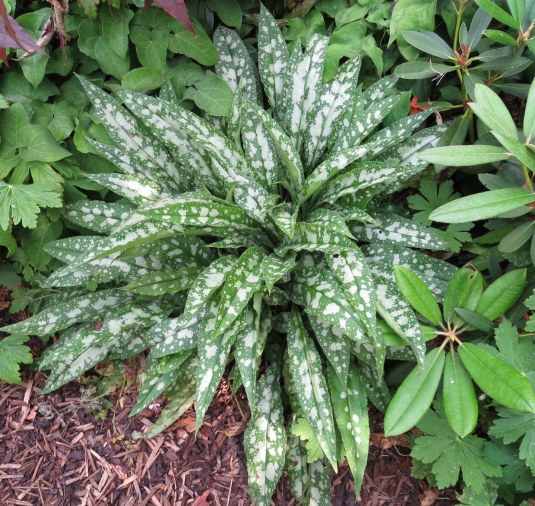 Not forgetting the different colours that foliage can bring, the popular Persicaria ‘Red Dragon’ has been making a lovely combination with the fresh new growth of an adjacent fern (probably labelled, but smothered in undergrowth) recently:

Thanks to Christina for hosting this meme, which encourages us to look at foliage in a different way. Completing this post and grown particularly for foliage are heucheras – after a winter of despair the heucheras around the base of the young Acer griseum have perked up and look human again, although there is a Heuchera ‘Green Spice’ amongst them which really needs to be somewhere else and enough space for a couple more in an appropriately autumnal hue: 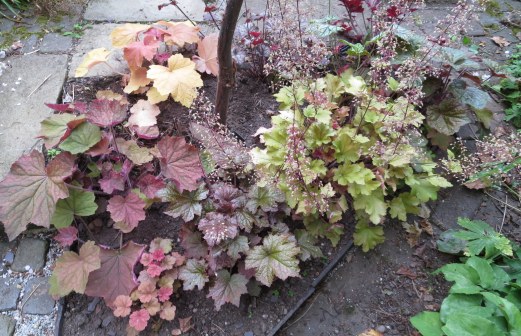 12 Responses to Garden Bloggers Foliage Day: the Shreds of Evidence