There are many blooms in the garden this month but they are undoubtedly dominated by the roses. Even from the kitchen windows we have the pleasure of ‘Rambling Rector’, above, ‘Rural England’ (as described the other day), below:

…whilst further down is the actual ‘rose garden’, shown from a different perspective today: 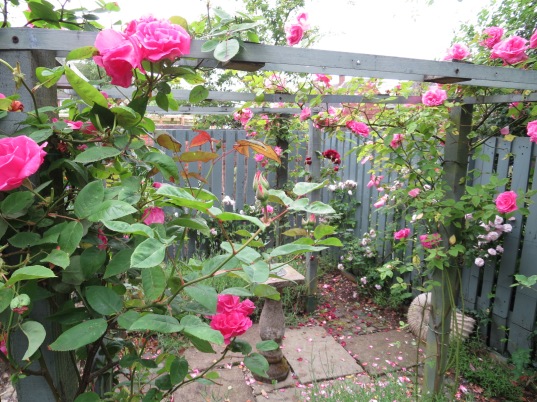 Here there are four ‘Zéphirine Drouhin’ on diagonal posts and four ‘Guinée’ on the other diagonals, with ‘Blush Noisette’ on the the fences which form three sides of the space. To the left and out of the picture is the ‘bus shelter’ with ‘Madame Alfred Carrière’ climbing over it, ‘The Fairy’ either side, and two urns (new this year) with ‘Magic Carpet’. The posts shown above are underplanted with lavender and not surprisingly the fragrance here in recent weeks has been sublime, not just when rambling through but when working in nearby parts of the garden too. Like other parts of the garden revamped two years ago this is all beginning to fall into place.

At the front of the house ‘Pink Perpetue is also in full bloom, with an already floriferous Clematis ‘Étoile Violette’, both taking advantage of the morning sunshine at this side of the house. I noticed just the other morning that another two or three feet of growth would see ‘Pink Perpetué’ reach our bedroom window, just visible in this picture – wouldn’t that be nice?!

Another highlight this month are the geraniums in the clematis colonnade, providing colour as the clematis above them ebb and flow. Initially there were four different geraniums, the same four planted in each of the four beds, but when some failed they tended to be replaced with others that just needed a home – the dominant colours are currently provided by ‘Dragon Heart’ and ‘Johnson’s Blue’:

The mostly new Clematis alpinas finished some weeks ago, but the larger clematis are beginning to come to the fore. The earlier ‘Josephine’ (bottom left) is probably just about past her peak, but has built up to it over a number of weeks, ‘Rebecca’ (top right) has another flower (almost slug-ignored), the first ‘Princess Diana’ (top right) are just opening (I love not just the colour but the shape and the texture of those leathery petals) and there are lots more buds lined up to join the just-opened ‘Hagley Hybrid’ (bottom right): 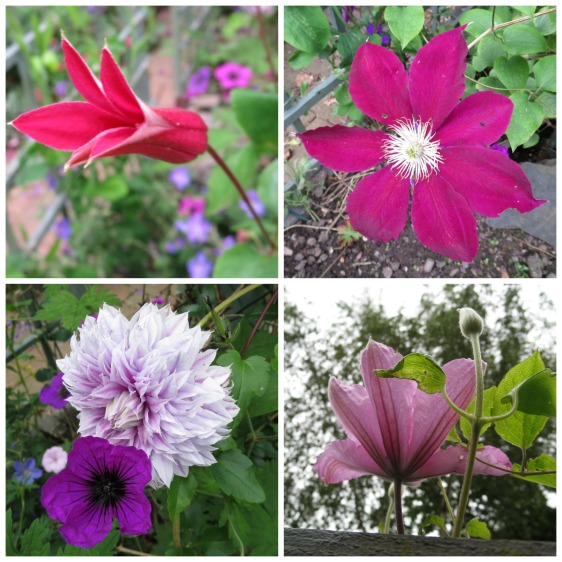 Meanwhile, down at the bottom of the garden the hot borders are actually looking ‘hotter’ than they ever have been, with little sign of the ‘boldness’ I have been trying to introduce with pinks and purples. More roses (‘Parkdirektor Riggers’), geum, the baskets described earlier this week, some Aquilegia ‘Oranges and Lemons’ and emerging buds on various hemerocallis: 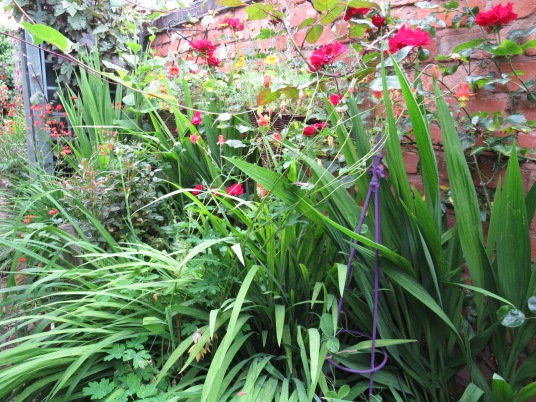 It must sound like wall-to-wall blooms here, and in truth that just about sums up GBBD this June – and although I may not count the blooms every day I certainly count my blessings! Thank you to Carol at May Dreams Gardens for hosting this meme and allowing us to share our blooms with a wider audience. Do visit her blog for links to many more gardens to saw what is flowering there.