In a Vase on Monday: Lace and Fineness 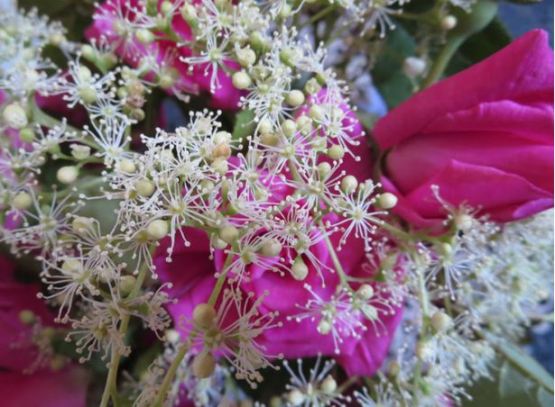 As in recent weeks, in this period of floral abundance, the decision on what to include in today’s vase was made some days ago although there was still the choice of rose to make this morning. The title was there as well, a more subtle ‘earworm’* than some, but I did make a pencilled note in case it disappeared from my head as quickly as it arrived. 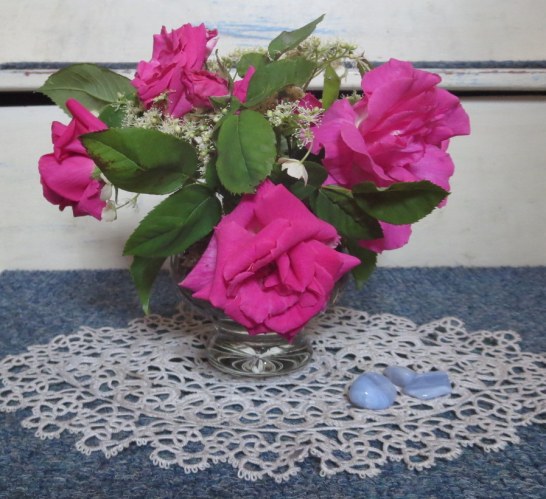 So, today’s ‘ageless, timeless’ vase contains the simple beauty and elegance of Rose ‘Zéphirine Drouhin’ and a single head of Hydrangea petiolaris, the climbing hydrangea. I had spotted the latter only last week as a potential contender for future vases, both in flower as it is now and the spent dry flowerheads for winter vases. The view from above, shown in the first picture, shows how pretty and lacey the flower is. As for the roses, I made a beeline for these just because of the colour, but then wondered if I should have gone for the deep red ‘Guinée’ instead – or a mixture of the two – but I think I have made the right decision. But then how many? In bud or in full bloom? This is something I will learn for future vases, how to get the balance right or at least satisfactory. 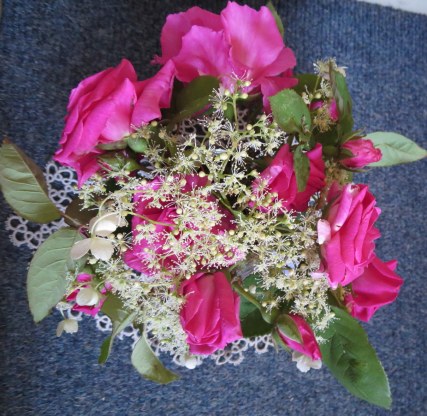 The flowers were placed in a small lead crystal bowl, a car boot bargain that had a deep scratch on one side but which is irrelevant when it is being used like this, and were held in place with a pin holder or ‘frog’ with sphagnum moss packed around the stems to hide the metal holder. I believe the mat is Spanish lace, given to me many years ago, and the other props are blue lace agate crystals which fortuitously tie in nicely with the blue carpet tiles on the treads of our stairs where the vase was photographed, another position which gets the light at this time of day, although as I write this the sky has darkened and rain is beckoning.

I think this vase has achieved the brief I had in mind and I shall enjoy looking at it during the week, although I shall not be stepping over it every time I go upstairs (too may ‘I’s in that sentence – sorry!). The allium in last week’s vase still looks fresh and the geranium lasted almost a week too, but the others were gradually removed over the week – a good advertisement for cutting the former two though. If you would like to join in this increasingly popular meme and get the same buzz as those of us who already fill a vase on Monday, then please do, either regularly or occasionally. The idea is that it will be something found in our own gardens or thereabouts, and thinking out of the box is actively encouraged! Just post as usual, with a link to this post and a link back to yours from a comment on this post – that we way we can all share, encourage and inspire each other. Hurrah! It’s Monday!

* Rod Stewart ‘You’re in My Heart’

Like Loading...
This entry was posted in Gardening, Gardens, In a Vase on Monday and tagged flowers in a vase, Hydrangea petiolaris, Rose Zéphirine Drouhin. Bookmark the permalink.

36 Responses to In a Vase on Monday: Lace and Fineness