In a Vase on Monday: Sunrise, Sunset 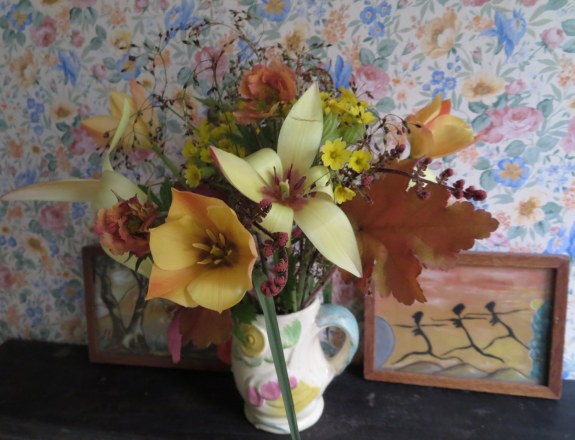 Whoohoo! It’s Monday again and time to scour the garden for likely blooms, dusty shelves for vases and assorted bits and bobs for props. If you would like to join in this empowering meme, just post your vase of bits from your own garden or thereabouts and link it this post, leaving a link to yours in a comment. The pleasure of putting together a vase every week ( or even occasionally) has succeeded any expectations any of us might have had, so do have a go if you haven’t already done so. 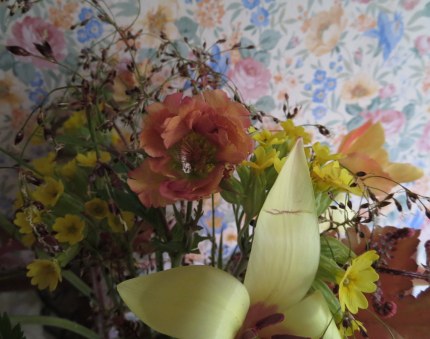 I am conscious that not only have tulips been used again today but that  the vase is on a similar colour spectrum to last week’s, but will certainly not beat myself up about it. The tulips will not be around for very much longer and the soft apricot Tulipa batalini ‘Bright Gem’ in the foreground had just burst out from the tight buds and showed how pretty they were, not really the ‘sulphur yellow, flushed orange’ described in the Peter Nyssen catalogue after all – and all the better for it. They were flowering right next to Geum ‘Tequila Sunrise’ with its apricot feathery petals and the combination sold itself immediately, supplemented with Tulipa clusiana ‘Cynthia’ from the same bed. 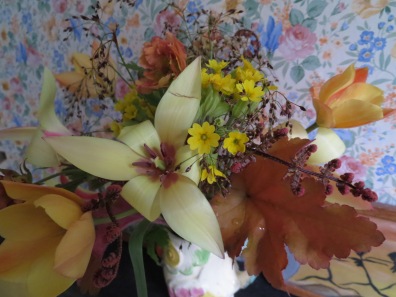 Supplementary blooms and foliage were easy to find – Primula veris (cowslip), leaves of Heuchera ‘Marmalade’, flowering stems of that useful Luzula and gorgeous curly red fronds of Dryopteris erythrosora ‘Prolifera’, the rosy buckler fern. I decided on the sunny spring colours of a vintage chicken jug, and added two 1920s amateur watercolours from north Australia. Trying out a new spot for the photographs in a hallway at the foot of the stairs seems to have been fairly successful as it is not in direct sunlight at this time of day, thus increasing my options for what is often the most difficult part of the challenge and contributing to an overall effect that seems to have worked quite well. I wonder what will be in my vase next week?! 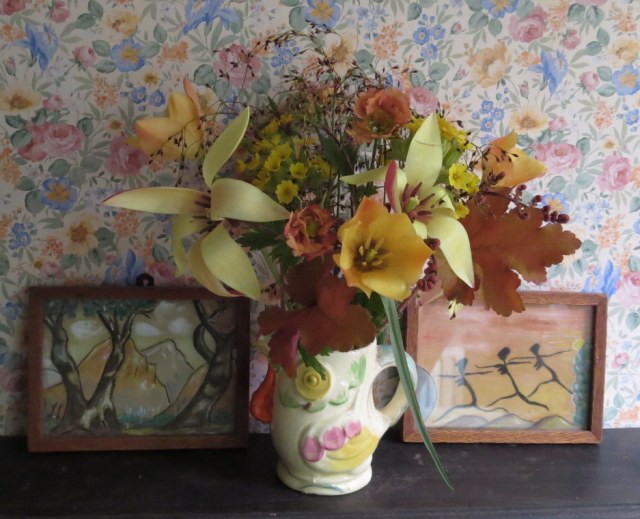 29 Responses to In a Vase on Monday: Sunrise, Sunset