April somehow seems to be a new chapter in the seasonal life of a garden, being a month which can generally be relied on to be milder than much of the last five months, all of which can be very variable from year to year – last month and March 2012 were both mild and sunny, for example, but not so the cold and snowy March of 2013.

The most obvious change over the last month has been the final demise of the snowdrops for this year, apart from a few random singletons, leaves appearing on many deciduous shrubs like cornus and chaenomeles and the first signs on some trees too, blossom on the magnolia (early) and wild plum, and the accelerated reappearance of the majority of herbaceous perennials. April is indeed marching on apace!

Cornus and Rosa ‘Munstead Wood’ in the planters, along with some unidentified tulips, have been providing interest on the paved area visible from the kitchen windows, and Tulip ‘Peach Blossom’ is now coming through in the pots with the pansies in the foreground. The magnolia is smothered in blossom, some even at eye level (mine, that is, which is low) and beyond and beside the sitooterie the trees are beginning to come to life.

The Tête-à -Tête beside the stream are just on the cusp of their ‘best’ and are already taller and somewhat less charming than when they first appeared. The three columnar fruit trees on the right (cherry, pear, greengage) are budding up nicely. The stream, alas and alack, seems to have developed an electrical fault to add to its woes and is not running at the moment.

The woodland floor is coming into its own, being awash in wood anemones on the right (partially camouflaging the primroses), whereas clumps of bluebells on the left are looking healthy but have not flowered well for a little while – do they need to be split I wonder, although this doesn’t happen in the wild? The wild garlic, fortunately, is still in a manageable quantity. 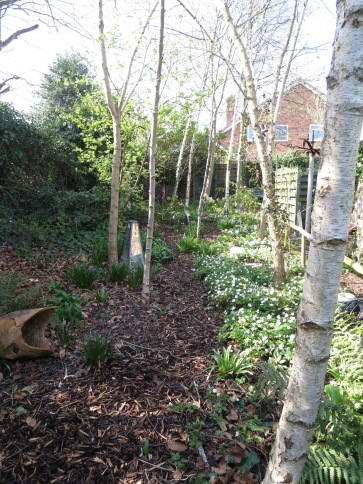 The main herbaceous borders are greening up after a bare winter, and I am determined to ensure they are filled to capacity this year with additional annuals grown from seed – so far they would have had ‘could do better’ in their school reports. In the pots in the foreground the hostas, a new venture last year, are beginning to stir and poke their noses out the soil.

The woodland edge border, here seen from both directions, has been delightful in recent months with snowdrops, hellebores and now pulmonarias, and already much of the remaining area of bare earth is smothered in geranium foliage.

The previously named hot borders are ready and waiting to become ‘bold’ rather than ‘hot’, but are already filling with new growth on geums, hemerocallis and an assortment of other bits and bobs, including some red wallflowers which look as if they may finally flower.

The blue and white borders are filling out too, with some of last year’s new additions looking promising, although I have already had to ‘deal’ with lily beetle on the L. candidum. The amelanchier, of which only the trunk is visible in the centre of the circle, is very prettily covered in flowers and young bronze leaves. Later in the year these borders will be in sun for most of the day, but the height of the sun at this time of year produces shadows instead although the vertical spaces in the fence adjoining the rose garden allow some light through at all times. 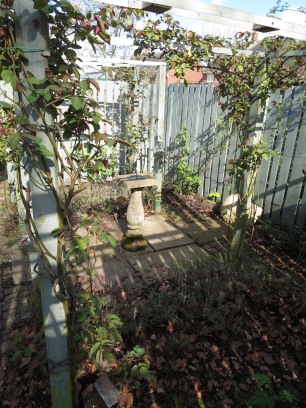 On the eight pillars in the rose garden are four Zépherine Drouhin and four Guinée roses; the former and two of the latter were moved from their previous location in the garden, so the two newer Guinée are playing catch up. Zépherine Drouhin is certainly the more vigorous of the two and some of them are now spreading along the horizontals which of course is the desired effect. Underneath the roses the lavender is showing signs of new growth so we shall soon see how successful my pruning was!

Through the clematis colonnade and retracing my steps towards the house we reach the species snowdrop border, with snowdrops now fading into seasonal obscurity, is still looking perky with the addition of some additional white hellebores and pulmonaria, as well as the white pansies which have really only just started flowering reliably. The hedge border next to it, beyond the arbour with Rambling Rector, has reached the first anniversary of its creation and has made a promising start and the white Anemone blanda are certainly making an impact. I am hoping for a good showing of flowers on Clematis Montana grandiflora, trained (sort of) up an old hawthorn stump in the hedge.

As this end of month view is essentially for my own records I have been telling it exactly how it is – and yes, some parts of the garden are looking good, but there also areas that need attention although having more time to devote to the garden in the last couple of years is now paying dividends. nevertheless, it is still a pleasure to share the garden with others in this way. Do look at the map of the garden to see how the different bits fit together, and pop over to Helen’s blog at Patient Gardener to find links to other people’s gardens at the end of March.

Like Loading...
This entry was posted in End of Month View, garden structure, Gardening, Gardens and tagged end of month view. Bookmark the permalink.

39 Responses to End of Month View: April Marches On