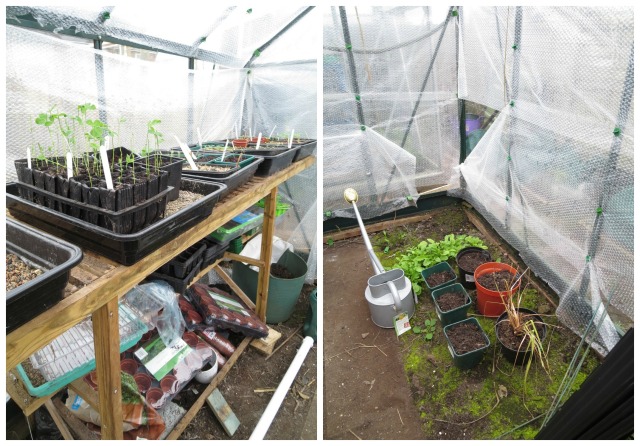 Helen at Patient Gardener recently began posting about her greenhouse which seems to have triggered a bit of a pseudo-meme: perhaps we all now feel a little more confident baring all, knowing we are amongst blogging friends.

Above is the view from the doorway into the existing 6 x 8 aluminium framed greenhouse, the purpose built (by the Golfer) staging on the left housing gravel trays with this year’s seedlings, moved here from the house as soon as they germinated. There is a narrower lower shelf which in practice has just been used for storage but currently also has packs of little pots and trays purchased for the newer half-greenhouse chucked against them. On the floor is the 1.5m tubular heater which gave me a (financial) shock at the end of January when I twigged that despite its 190w rating and thermostatic control if it was on all the time it could still use over 130Kw in a month. Checking the minimum overnight temperature every morning, which I did anyway, I was able to lower the thermostat so that the heater should only come on when temperatures were dipping below 0°C. Hopefully there will be a noticeable improvement when I check our overall energy consumption at the end of this month. 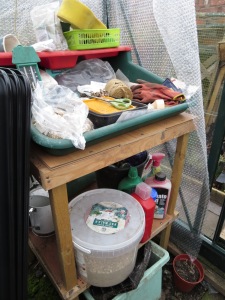 On the right, where tomatoes were grown last year in pots sunk into the soil (why did I not plant them directly into the soil? No idea), there are short rows of winter sown salad leaves and rocket – the first time I have done this. You can also clearly see the mixed success of the bubblewrap insulation – having the heater stopped the severe condensation issue, but clipping into corners was not particularly effective and the ordinary clips pop out with regularity. I will do it again next year, but will use a better quality bubble wrap and in a width wide enough to hang the lengths vertically. Just inside the door is the unit where I pot things up – and accumulate last year’s seed packets and a host of other things. Hmm… 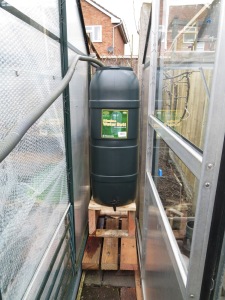 This shows how much (ie how little) space there is between the existing greenhouse on the left and the newer cut-down greenhouse on the right – just enough for a slimline water butt (meaning if I ever develop more than a slimline butt I won’t be able to access the smaller greenhouse, of course….. ). We now need to

decide whether to collect the water off the roof of this other greenhouse, as the previous larger butt was quickly emptied when there were tomatoes to be watered.

Inside the new structure, literally half the size of the 6 x 8 greenhouse we bought from eBay, we have temporarily laid some of our spare bricks to give a hard surface underfoot – these will be properly bedded on sand in due course. The trays of autumn sown aquilegia have been moved onto temporary shelving until a staging plan has been decided on – probably a horseshoe of standard height shelves but I am still cogitating about lower and higher shelves. On the floor are autumn sown sweet peas and overwintered fuchsia and pelargonium, the first year I have made a conscious effort with these – and all are looking good. 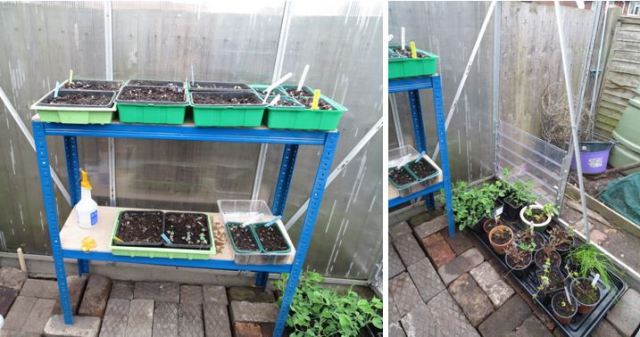 You would be forgiven for thinking there was no glass in the right hand side – but it’s just new and clean! Polycarbonate from the older greenhouse has been used for the back and left sides here as they are against fences, but all other panels of both are now glass – and I am dumfounded about the difference it makes to the light, even with the bubblewrap insulation in the older greenhouse. We had to buy some extra panes to make up the shortfall from glazing both, but it is definitely worth it and I am convinced the aquilegia have put on a spurt since they had a brighter environment!

So, those are our greenhouses – right at the bottom of the garden away from the trees and where they will get the most sun. It has been interesting reading other posts about bloggers’ greenhouses and the comments they have generated, as this shared process has brought new ideas and suggestions, a kind of thinking aloud – so let’s hope for a successful greenhouse season for all of us.

Like Loading...
This entry was posted in Gardening, Gardens, greenhouse and tagged greenhouse, greenhouse heater, greenhouse insulation. Bookmark the permalink.