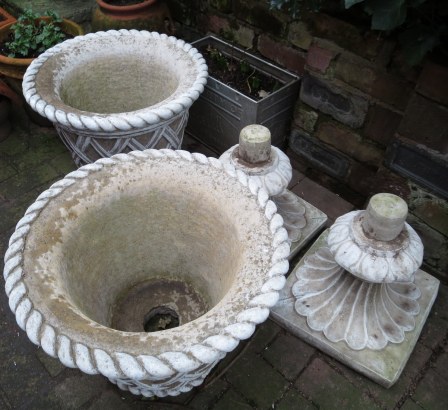 The promised rain clouds arriving simultaneously with the time available for gardening and resulted in jobs being kept to the minimum. Greenhouse checked, seeds checked, snowdrops checked (more than once) – and the bases of these urns moved down to the rose garden. There is no way I will attempt to move the top parts on my own, and the Golfer was busy with greenhouse erection, so they can wait awhile. Having bought them from our local reclamation yard last week I am pretty sure I have now identified them as Haddonstone, making them not only very stylish but a really good buy indeed. They will be located on either side of the ‘bus shelter’ in the rose garden and will have ‘Magic Carpet’ roses, a pink groundcover variety, trailing from them. My rose order from David Austin also includes ‘Snow Goose’, a repeat flowering rambler which was finally decided on for the wall of the blue & white courtyard (which seems to be happily adopting this spontaneous change of name). 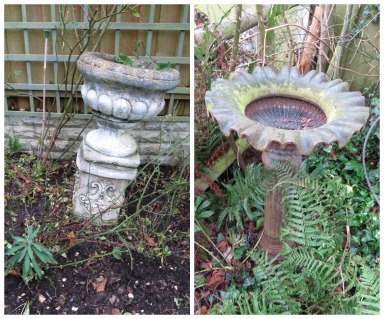 A decision now needs to made (for the purposes of good garden housekeeping) on whether to keep not only the lopsided urn for which I was hoping to find a double for the above location, but also this metal urn that has been languishing in the woodland edge since it was ousted from a previous home (and in posting this photo I have excitedly discovered I can shrink this PicMonkey collage to have rectangular images – whoohoo!) Prior to their current temporary spots, both were in borders with summer bedding plants and could be so again – although on uploading the second image I was astonished at how ‘at home’ it looked just hidden amongst the woodland plants, so it may have relocated itself already.

The UK Midlands has yet again avoided the brunt of the high winds and rain that have lashed the SW and parts of Wales and we can only extend heartfelt sympathy to those whose homes and livelihoods have been adversely affected. We still felt some effects of the wind – realising when the window slammed shut as we went to bed on Monday night that the half erected greenhouse might be at risk. Fortunately a temporary polycarbonate sheet lost to a neighbouring garden was the only casualty, and not any of the glazed panels or untethered framework. A small branch, however, was found – shock! horror! – across the species snowdrop border, miraculously placing itself very considerately in-between the plants! 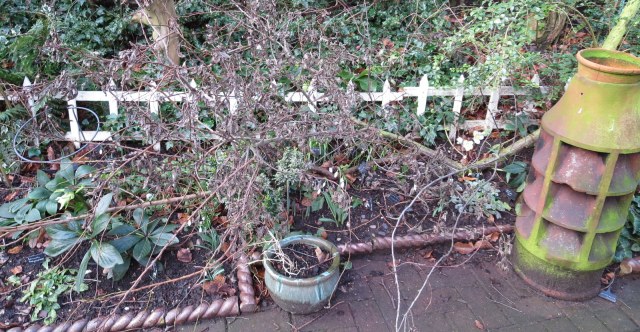 Snowdrop sleuthing has continued apace once the twiggy intruder was removed and cut down to size, and following a one-sided discussion with Freda Cox I am fairly confident that the Augustus imposter is in fact Sam Arnott, another snowdrop that had gone missing and was replaced – why it was labelled as Augustus I cannot imagine! This leaves just one snowdrop to identify and with a bud emerging further every day it shouldn’t be long before an open flower will clinch it. In the meantime, I was intrigued to compare the increasingly  distinct yellow markings on my original and recently re-found Lady Elphinstone (left) with the still largely green marking of the replacement bought last year. Freda Cox tells us that Her Ladyship may revert to green after transplanting until she settles down again, and although it’s not obvious from the photo there is actually a hint of yellow along with the green inverted ‘v’. 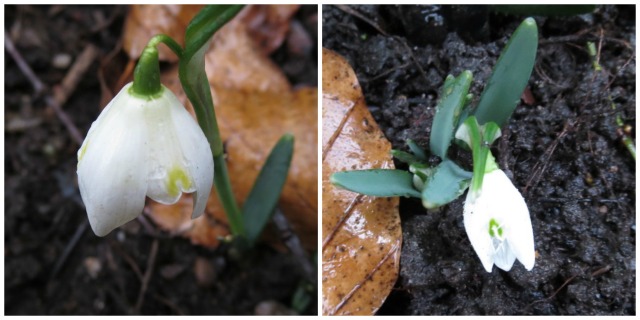 13 Responses to Keeping Their Urn