End of Month View: Around the Corner

Some of the bloggers who join in Helen’s End of Month meme at Patient Gardener have decided to focus on one particular border or area of the garden this year. As I want to keep a record for my own interest I shall continue looking at the whole garden, even though at this time of year the changes are not readily visible. The other dilemma involves photographs – lots of views mean more space taken up on the blog, but smaller pictures mean lower resolution. When my blog was first started it would have taken a number of years to fill the allowable space, but longer posts and more photos have seen it filling up at an accelerated rate, so apologies for any lack of clarity and thank you as always to Helen for making it possible to readily share these monthly posts.

Starting as always from outside the kitchen windows, the view across the paved area shows little colour at present, other than pansies in the posts in the foreground and the lovely cornus stems in the square lead effect pots, but in all the pots there are already signs of tulip bulbs pushing skywards, perhaps a little early, but that’s this winter for you. On the right is the streamside view, with some of the gorgeous witch hazels. Again, bulbs are poking through, lots of Tête-à-Tête and some more Crocus tommasinianus to add to the few planted before. 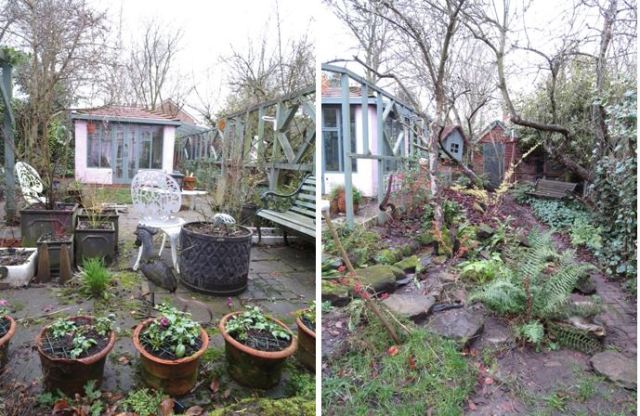 Even a larger picture of the woodland would not show the wood anemones and bluebells that on close inspection are becoming apparent above the leaf litter, whereas the main borders really are just ‘in waiting’ for new growth to begin again – although here and there are signs of species tulips, always well in advance of their larger counterparts. There is still planting to get right in these beds as the season progresses. Hopefully the various hostas which are collecting themselves in the pots in the foreground will see the winter through unscathed, this being the first time I have had them in anything other than large pots.

Clematis in the colonnade shown above left have been recently pruned but need to be reassessed later in the year to see if any extras are needed to extend the flowering season on each post. Likewise the geranium in the beds at their base may need a boost as some of the varieties planted are a bit on the lanky side which is not what was intended; I was intrigued to find a lonely flower on a G sanguineum here as I rambled this morning! The woodland edge border on the right is ready to take off in the next few weeks as the hellebores and ordinary snowdrops get going and will no doubt be starring in next month’s EOMV. You may just about make out the ‘full stop’ (or perhaps more of a semi colon) at the end of the path through this border, the recently revamped boundary between it and the right hand side hot border, which does exactly what it was meant to do and look as if it has been there much longer than it has. 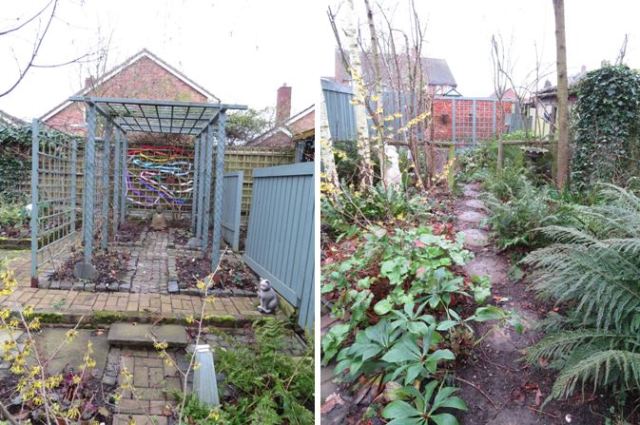 The hot borders are awaiting their transformation into bold borders this season with the addition of bold and bright annuals, dahlias and some late bulbs. This is a real change in direction, but hopefully will get over my struggle to fill them with hot colours for most of the season – I am quite excited about this change, but it may take a year or two to see what works and what doesn’t, and which annuals are worth the effort of sowing and nurturing. 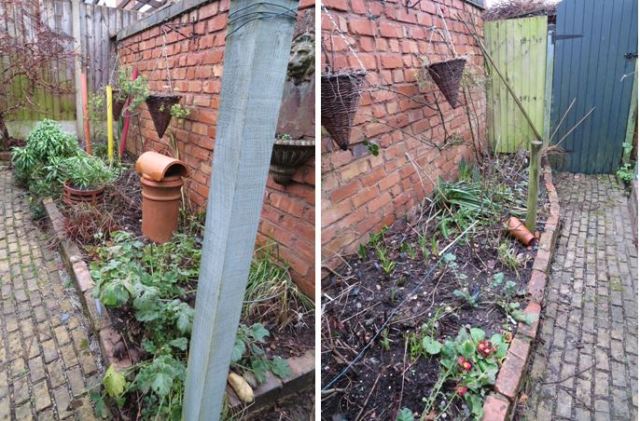 The equivalent ‘semi colon’ in front of the hot border on the left side has also been successful, now nicely defining the blue & white borders and creating almost a courtyard space. I am well chuffed with this and just need to get the planting sorted – again, I hope to make more use of annuals here this year.

Two views of the rose garden this time, the first looking towards the ‘bus shelter’, on either side of which will soon be two recently purchased (from the our reclamation place) urns with prostrate roses trailing from them – at least that’s the idea. I had been hoping to find a matching partner for the leaning urn on the left, a not uncommon concrete creation, but the place we got it from doesn’t produce them anymore and we haven’t come across one at a car boot sale either. All the existing roses have been sprouting new shoots for weeks now, raring to get going and establish this enclave further, and I shall also be interested to see the result of my pruning of the lavender at their feet in this the second season of these young plants.

If you find yourselves disorientated following this end of month ramble, do have a look at the plan of the garden to help you. We are now doubling back toward the house where we can see the species snowdrop border that is demanding so much attention recently and beyond that the hedge border created a little under a year ago following the removal of the D****’s plant. The latter reminds me how quickly new planting can take shape and transform an area, with this bed about to be transformed further with lots of white crocus  and Anemone blanda in a few week’s time. Such an exciting time of year in the garden, this winter/spring transition, so do pop over to Helen’s blog to see what is happening in other gardens – and watch this space!

20 Responses to End of Month View: Around the Corner