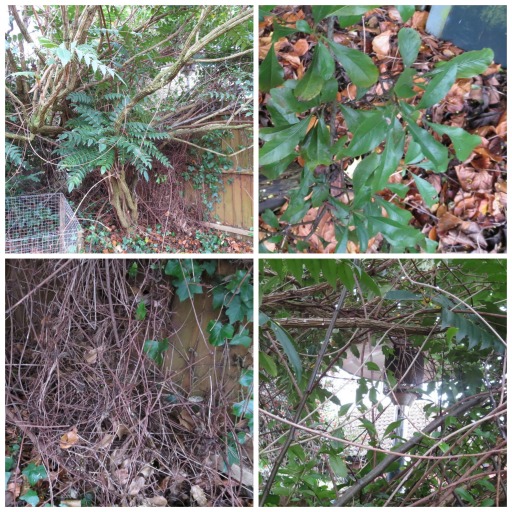 I suspect the unloved mahonia is sniggering quietly away to itself in the far corner of the woodland, smug in the knowledge that despite my lack of affection it has generated more than just a little attention on this blog. I have given it more thought this week than at any time before, contemplating its future. Well aware that it should sprout fresh new shoots if cut right back – or maybe not, considering the age and thickness of its myriad stems – I have to consider the effect its vastly reduced height would have (did you know mahonia ‘Charity’ could grow to 6m? That’s what the RHS Encyclopaedia says and this mahonia agrees). As it stands, it provides a definite full stop to this corner, blocking out views of the three gardens which adjoin ours at this point, the only part of the garden where there is a multiple boundary – currently, you wouldn’t have a clue what there is over the fence here, but the picture lower right gives you an idea.

Tucked down behind the mahonia are hundreds of wizened stems of Russian or Mile-A-Minute Vine (lower left) and possibly live roots somewhere too, more’s the pity – but also a slim and butchered sloe (upper right). I never knew that was there – and I wonder how long it would take, given love and attention, to grow tall enough to fill a gap left by an overgrown mahonia….? If the latter did come out, there would certainly need to be an alternative full stop – not necessarily a plant, but it would take a large feature to replace it. Woodcutter’s hut maybe? While inspiration is brewing the unloved mahonia can stay.

Looking below, can anyone identify the plant on the left, which is now about 4 or 5 feet tall, so may grow into a shrub or tree, but I think it spreads by suckers as I am sure this is what has popped up in lots of different parts of the woodland edge border and I have previously cut the shoots off before they take hold but clearly missed this one. The leaves have a definite slight crinkling on their edges. On the right, a more welcome specimen and another murmuring – a hint of colour on Hamamelis ‘Orange Peel’ , new this year, and which I missed when checking my other witch hazels yesterday. 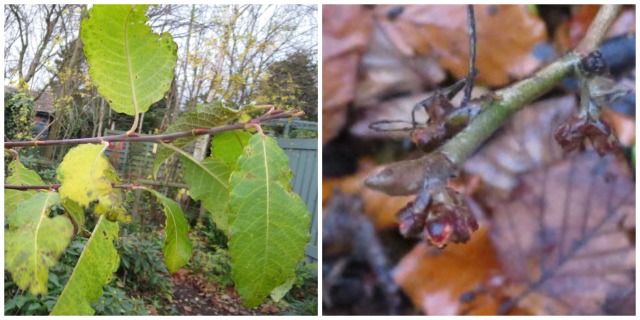